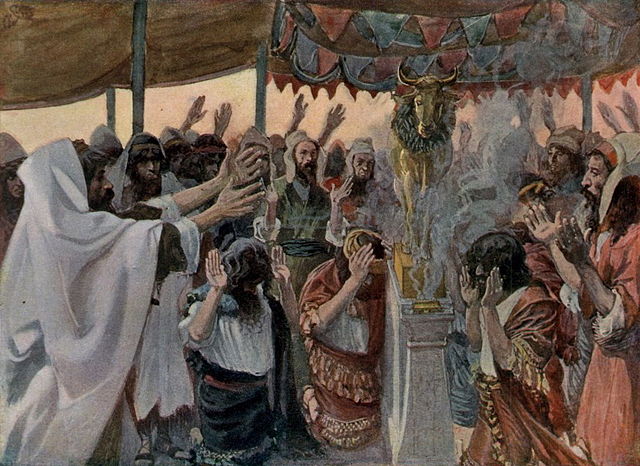 Worshipping other than God to get nearer to God

It is to Allah alone that sincere obedience is due (al-din al-khalis: sincere/specific religion/system: obedience due to God alone). And those who take other guardians (awliya’) besides Him say, We serve (na’bud) them only that they may bring us nearer to God. Surely, Allah will judge between them concerning that wherein they differ. God does not guide anyone who is bent on lying and is a disbelieving liar. (Quran, 39:3)

The word ‘worship’ or ‘serve’ should be taken in its wide and truest sense. ‘We worship’ in arabic is na’bud coming from the root ‘abd (ع-ب-د). ‘Abd means slave/servant which then forms the name like Abdullah meaning slave/servant of Allah. Whether the actual translation of ‘abd as slave or servant does not matter to me, what is important is that it shows total obedience and surrender to his master.

All of us are slaves of Allah, even those who are considered to be a disbeliever. God used the word ‘ibaad (plural of ‘abd/’aabid) to refer to the Babylonian army in the Quran which colonised the old civilisation of the Israelites.

“So when the [time of] promise came for the first of them, We sent against you (Children of Israel) servants (the Babylonians) of Ours – those of great military might, and they probed [even] into the homes, and it was a promise fulfilled.” (Quran 17:5)

According to historical records, it was the Babylonians who colonised the Israelites and plunged from them what was their greatest achievement- a civilisation built by prophets Daud and Sulaiman. The Israelites were then exiled out of thier own lands, in Babylon- hence the song “By the rivers of Babylon” which attempted to depict the cries of the Israelites who lost their home.

Difference between believer and disbeliever

The only difference between a Muslim and a kaafir is that the kaafir while worshipping Allah worships other things too, making worship and deen not to God alone. The Muslim on the other hand, specifies his worship only to God, making worship and deen to God alone. The Muslim places his whole system of life to God- his fears, his love, his passion, his hopes, his aims, his guidance, his laws, his way of living- and only to God.

To make it easy, worship can be divided into three important limbs: fear-love-obedience. It is not enough that one fears God but does not love God. God said that those who believe love God more than anything else (Quran, 2:165). It is also true vice versa. It is also not enough that one loves and fears God, but does not follow what is natural from it: to obey God in all His commands and staying away from His prohibitions.

Worship is only strictly to God, without intermediaries and association.

Returning to the main point, we can learn from the ayah in the beginning that those who worship other than God to get nearer to God is in manifest error. We must not mix our love for God with our love for the world/ideas.

According to Maududi in his commentary of the Quran, when commenting on this verse quoted a Hadith which Ibn Marduyah has related from Yazid ar-Raqashi. He says: A person asked the Prophet (peace be upon him): We give away our wealth so that we become well-known. Shall we get a reward for this? The Prophet (peace be upon him) replied: No. He asked: What, if one has the intention both of Allah’s reward and of reputation in the world? The Holy Prophet replied: Allah does not accept any deed unless it is performed exclusively for His sake. After this he recited this same verse. 1

The two ways of shirk

To do such a thing is shirk and indeed it is the most wretched sins. As far as my knowledge I have recognised two ways of shirk in the Quran. One is shirk by associating God- either with His essence, attributes or authority. This was done by the Quraisy (the leading clan in Mecca) who associated God with demi gods and progeny. The second is shirk by having intermediaries to God or representative. In Islam, we are taught of tawakkal- which means the act of giving up to God for our affairs.

“And rely (tawakkal) upon Allah ; and sufficient is Allah as Disposer of affairs (wakil).” (Quran 33:3)

“They have taken their scholars and monks as lords besides Allah, and [also] the Messiah, the son of Mary. And they were not commanded except to worship one god; there is no deity except Him. Exalted is He above whatever they associate with Him.” (Quran, 9:31)

To not commit shirk can be summarized in two words: ONE and DIRECT.

These two ways of shirk show how strict the relationship between God and man. Not only that we should serve God and only for God, but also serve directly to him without intermediaries.

Are we worshipping God today, without any shirk to Him?

You might say yes in your private life- might be that you pray to God only, and think of him everytime. But how about your public life? Are you living the life using the system (deen) ordained by God? Or are we living in a man-made system governed by man-made laws, doctrines and philosophies?

It is similarly a mistake when we worship other things to get nearer to God. For example, mixing the ideology of nationalism with Islam. Both of these ideologies have different ends (different gods). Nationalism and Islam can never go hand in hand, they contradict each other. Nationalism is the fight for a specific people/race/nation while Islam is the fight only for Allah. It is faulty to say that by fighting for our race we are also fighting for Islam. This is the fault blatantly committed by some or most Malays especially in Malaysia, who think that fighting for Malay superiority=fighting for religion. Not only this is racist but is also shirk, if we learn from the verse in the beginning.3

Also, in the process of making policies and laws that govern our lives, hardly there is God in them today. Might be that the parliament and the lawmakers make policies to ensure justice and fight evil. But to enforce justice and fight evil without having God in mind is, not only ineffective but also clearly denying the right of God. God is the ultimate moral lawgiver and source of good and meaning. How can we fight for something using the tool created by someone else, without acknowledging him or her? Denying the right/authority (haqq) of God is clearly an act of shirk. It is also an act of arrogance to God.

To get near to God is simple. Just worship God only. God is abudant in His greatness. You do not need any other thing than God, because God is your natural calling. God is all you need to feel greatness and satisfaction in life. God alone is enough.

We need to realise our weakness: we tend to justify our wrongdoings by sugarcoating it. Remember, our system/way of life is excusively to God. That is the natural state we are endowed with. In today’s world, most parts of our lives are devoided of God. This is clearly wrong and a big sin. Yet, many of us are content, thinking that this ‘modern’ system can get us nearer to God. Think again, can it really make us nearer to God, or is it just an excuse to escape from having to struggle in the way of God?

3 There is absolutely no wrong in trying to protect the dignity of our own people. When someone else spits on our culture and heritage, we shouldn’t feel content. But to make your own people as an end in life is completely wrong. In other words, nationalism should only be defensive, not offensive.