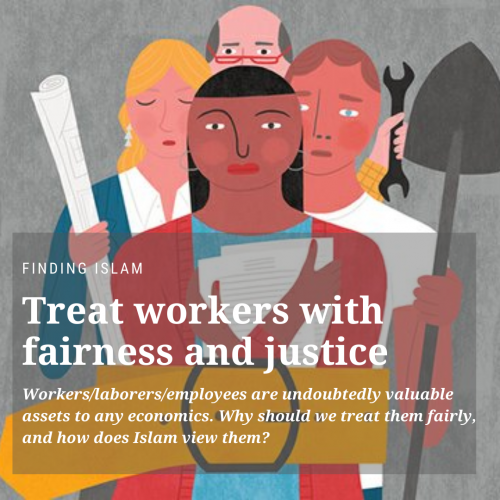 Treat workers with fairness and justice

It was the 1st of May 2020, also known around the world as Labour Day. But there I see my mother in front of the laptop, doing her work given by the employer- on a Labor Day!

Workers are human resources, that is why they should be treated differently than other resources (physical, financial, information). Workers/laborers/employees are undoubtedly valuable assets to any economics. Why should we treat them fairly, and how does Islam view them?

Before we go into how Islam views workers, I will be explaining a few important principles in Islamic economics and Islamic worldview.

Allah is the giver of rizq (wealth)

Although man attains wealth through his efforts and skills, he nevertheless depends ultimately on natural resources which is given by Allah. Man cannot escape being dependent on God and this is very clear in the way man eats from the animals and vegetations grown on Earth, wears from the skin of animals and materials made from plants, consumes and sells what is found beneath the seas, transports using animals or modernly using oil and metals found beneath the Earth, and even the air that man breaths from! All these sustenance comes from a single source- which is God who created them and made them subservient (sakhkhara) them specially for man.

وَالْأَنْعَامَ خَلَقَهَا ۗ لَكُمْ فِيهَا دِفْءٌ وَمَنَافِعُ وَمِنْهَا تَأْكُلُونَ
And He created the cattle for you; you have in them warm clothing and (many) advantages, and of them do you eat.

وَسَخَّرَ لَكُمُ اللَّيْلَ وَالنَّهَارَ وَالشَّمْسَ وَالْقَمَرَ ۖ وَالنُّجُومُ مُسَخَّرَاتٌ بِأَمْرِهِ ۗ إِنَّ فِي ذَٰلِكَ لَآيَاتٍ لِقَوْمٍ يَعْقِلُونَ
And He has made subservient for you the night and the day and the sun and the moon, and the stars are made subservient by His commandment; most surely there are signs in this for a people who ponder;

Although this concept is very obvious to many Muslims, it is not fully understood and appreciated. There are people who say that they are rich because of their own skills and efforts. Qarun said the same thing, and he was punished by God (Quran, 28:78-81). Instead, when this concept if fully engraved in the mind, then it should give one the

When it comes to employer’s relations with workers, it should be borne in mind that the aim of businesses is not to maximize profit but to maximize humanity. Therefore, employers should not squeeze the workers, but seek to have a relationship where both employers and workers benefit equally.

Unlike under the capitalistic system, God is nowhere in the picture. What is regarded as ‘good’ in capitalism is only to make profit. Even social responsibilities* in corporations (companies) are only for material gains, i.e, to escape tax liability or to promote their own products. This kind of system produces more Qaruns, not generosity.

Distribute the mercy of God

Related to the previous point, those who are grateful to their Lord should share the mercy of God.

أَهُمْ يَقْسِمُونَ رَحْمَتَ رَبِّكَ ۚ نَحْنُ قَسَمْنَا بَيْنَهُمْ مَعِيشَتَهُمْ فِي الْحَيَاةِ الدُّنْيَا ۚ وَرَفَعْنَا بَعْضَهُمْ فَوْقَ بَعْضٍ دَرَجَاتٍ لِيَتَّخِذَ بَعْضُهُمْ بَعْضًا سُخْرِيًّا
“Do they distribute the mercy of your Lord? It is We who have apportioned among them their livelihood in the life of this world and have raised some of them above others in degrees [of rank] that they may make use of one another for service. But the mercy of your Lord is better than whatever they accumulate.”

Sheikh Abdool Rahman said that Allah through His Final Messenger to mankind has informed us that exploitation and injustice must not be practiced. Instead, fair treatment and justice must be the basis for all human relations. [2]

In the capitalist system, what is regarded as justice is having a skillful and eloquent lawyer who can twist the law for the employer’s interests. Contrary, in Islam, man is fully accountable to God, regardless of whether it is forbidden by the state and regardless of whether the deed was done in public or in isolation.

Justice is a very important aspect in Islam as it is stressed a number of times in the Quran.

ۚ اعْدِلُوا هُوَ أَقْرَبُ لِلتَّقْوَىٰ ۖ وَاتَّقُوا اللَّهَ ۚ إِنَّ اللَّهَ خَبِيرٌ بِمَا تَعْمَلُونَ…
…Be just, that is nearer to righteousness (taqwa): and be conciouss of Allah. For Allah is well-acquainted with all that ye do.

…يَا أَيُّهَا الَّذِينَ آمَنُوا كُونُوا قَوَّامِينَ بِالْقِسْطِ شُهَدَاءَ لِلَّهِ وَلَوْ عَلَىٰ أَنْفُسِكُمْ أَوِ الْوَالِدَيْنِ وَالْأَقْرَبِينَ
O you who believe! be maintainers of justice, bearers of witness of Allah’s sake, though it may be against your own selves or (your) parents or near relatives;…

Do not pay less than what was agreed in the contract, do not overburden workers. In turn, workers should also do his job the best way, honestly and diligently. Justice is higher than the law (of the land), which must be abided to.

According to Mohamed Malkawi and Taqiuddin al-Nabhani, wage determination in Islam is calculated based on the real benefit of the product. The real value of the labor benefit is determined by experts in the field. [1]

This is in contrary to the marginal value theory used by capitalist economies. So the value is not estimated when there is a shortage of supply or excessive demand. It is estimated at the point where supply and demand are in equilibrium. But this theory is grounded on many unrealistic assumptions, like the market is perfectly competitive, equal bargaining power and every person has a perfect understanding of economics. [3] [1] The socialist’s wage determination on the other hand, the value of the labor of the employee is equal to the value of the final product produced by the laborer. However, the employee does not receive wages in exchange to their efforts. Their salaries and are determined by the state the amount that the states believe to be sufficient to cover their basic needs. [1] This is an infringement of the human need to have private property.

How did Prophet Muhammad (saws) taught about treating workers?

The final messenger has the highest character of a human, who we should all emulate. He said:

“Give the wages of employee before his sweat dry”

Hadith recorded in Bukhari, Hadith No. 2114

“ Do not give them workload more than their ability.  If workload is heavy help them”
“People work under you also Human being like you do not throw them into misery and suffering”

There are many reports of the sayings of the Prophet on how he taught us to treat our workers, like providing a safe place to work, ensuring employee’s welfare, to treat them with repect and dignity, etc. [4] Look at reference 2 and 4 to know more about worker’s rights in Islam.

In Islam, man should do business not only to benefit himself, but to benefit the society as a whole. This includes, importantly, treating employees the with fairness and justice. The Muslim remembers that it is God who gives wealth, not merely through his own efforts and skills. This makes him humble, generous, grateful and dutiful to his brothers, especially those who are working under him.

*Corporate Social Responsibility (CSR) is a self-regulating business model that helps a company be socially accountable—to itself, its stakeholders, and the public. One of the well-known responsibility to the public is by funding social events, giving charity, etc. The benefit of this is that companies get to escape or deduce taxes, promote their product, among other benefits.