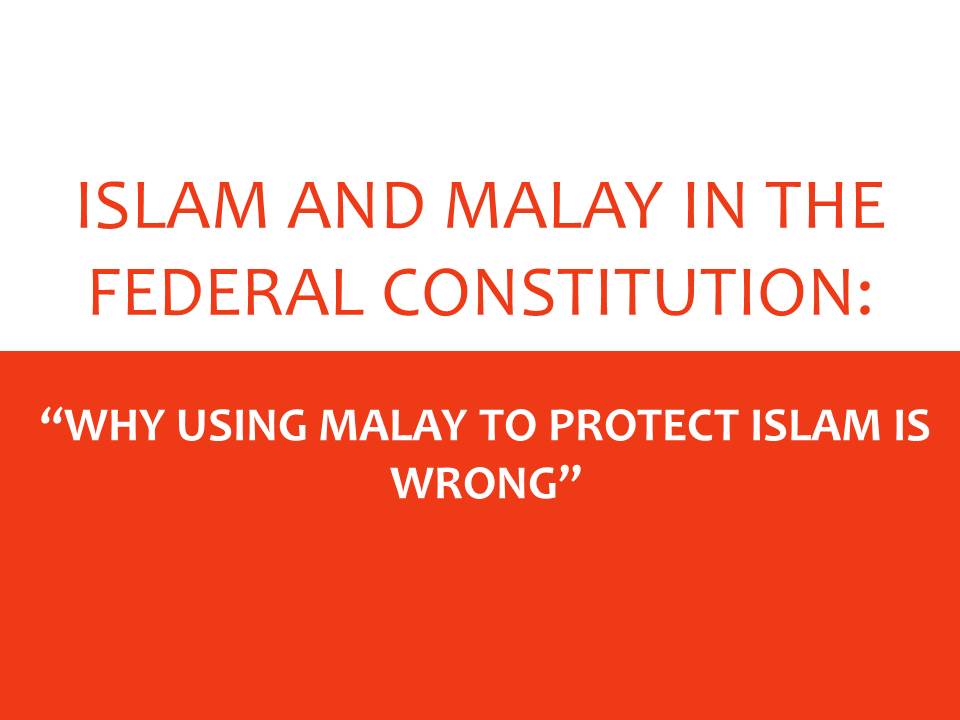 Why Using ‘Malay’ to protect Islam is Wrong: Islam and Malay in the Federal Constitution

In the name of Allah, the Most Compassionate, the Most  Merciful

When I was learning about the privileges of Malays in Malaysia, I recalled a senior friend of mine (who studied law too) talking about Malays and Islam. He said that the Federal Constitution of Malaysia protects the ‘rights’ and privileges of Malays. Since a Malay is a Muslim by law, so by protecting the rights of the Malays, the Federal Constitution is actually protecting Islam.

There are other ways the government uses the Malay race to protect Islam, like making the conversion from Islam to another religion forbidden (only if he/she is a Malay), and also guaranteeing every Malays as Muslims. Well, it does protect Islam in a way, but that way is very, very wrong (and detrimental too). Here are 4 reasons why (with number 4 being the best):

1. It only makes non-Malays despise Islam

Bumiputera refers to Malays and the natives of Sabah and Sarawak.

It is provisioned in Article 153 (1) of the Federal Constitution that the bumiputera’s special position is safeguarded by the Yang di-Pertuan Agong. The privileges of the special position are:- reasonable proportions in:

This means only the rights of Muslims that are Malay or native of Sabah and Sarawak are protected by the constitution.

Protecting Islam indirectly by protecting Malays is wrong. Islam has no race. Islam does not restrict itself to only protect one race. In other words, the Article 153 (1) is  racist. Instead, the privileges of every Muslim should be protected equally, regardless of race.

2. No one was born Muslim

There are people born into a Muslim family but no one was born a Muslim, because the first principle of Islam is proclaiming the syahadah.

However, Article 160 (2) defines that a Malay is someone who practices Islam. This means that anyone that is born into a Malay family, is automatically a Muslim, which is plain silly!

Also, There was a case in 2007 when the Federal Court rejected Lina Joy’s (real name Azlina Jailani) request to convert from Islam. She couldn’t convert because of Article 160 (2) which says that because Lina Joy was born Malay- therefore she must be Muslim.

This is not only silly, but in contradiction with the Quran, 2:256 which says that there shall be no compulsion in deen (religion).

4. It is against As-Sunnah

Yes, the government is trying to protect Islam. It makes conversion from Islam to other religions forbidden (only if you are Malay), it protects the privileges of Malays- which indirectly protects Islam.

Using race can have a very detrimental effect, it makes the non-Malays only despise Malay and Muslims. In fact, following anything other than the Sunnah and the Quran will give bad consequences.

Prophet Muhammad joined races to be one, not divide them. Race was merely colour, what differentiated Muslims is only taqwa. That’s how Islam flourished during the time of prophet Muhammad. People were attracted to Islam’s openness and the value of compassion, fairness, peace in it. The sunnah of the Federal Constitution is the other way around.

So he who does not follow my sunnah in religion, is not from me (not one of my followers).
-Sahih al-Bukhari 5063

We have to abolish our current system of protecting Islam using the Malay race. It is foolish and ridiculous.

Turn back to the Quran and Sunnah, how did prophet Muhammad established the Islamic country of Medina? How did he protect Islam then? By protecting the rights of Arabs?

This is what we should do, not by following our own heads on how to protect Islam like we know better than Allah and Rasul.