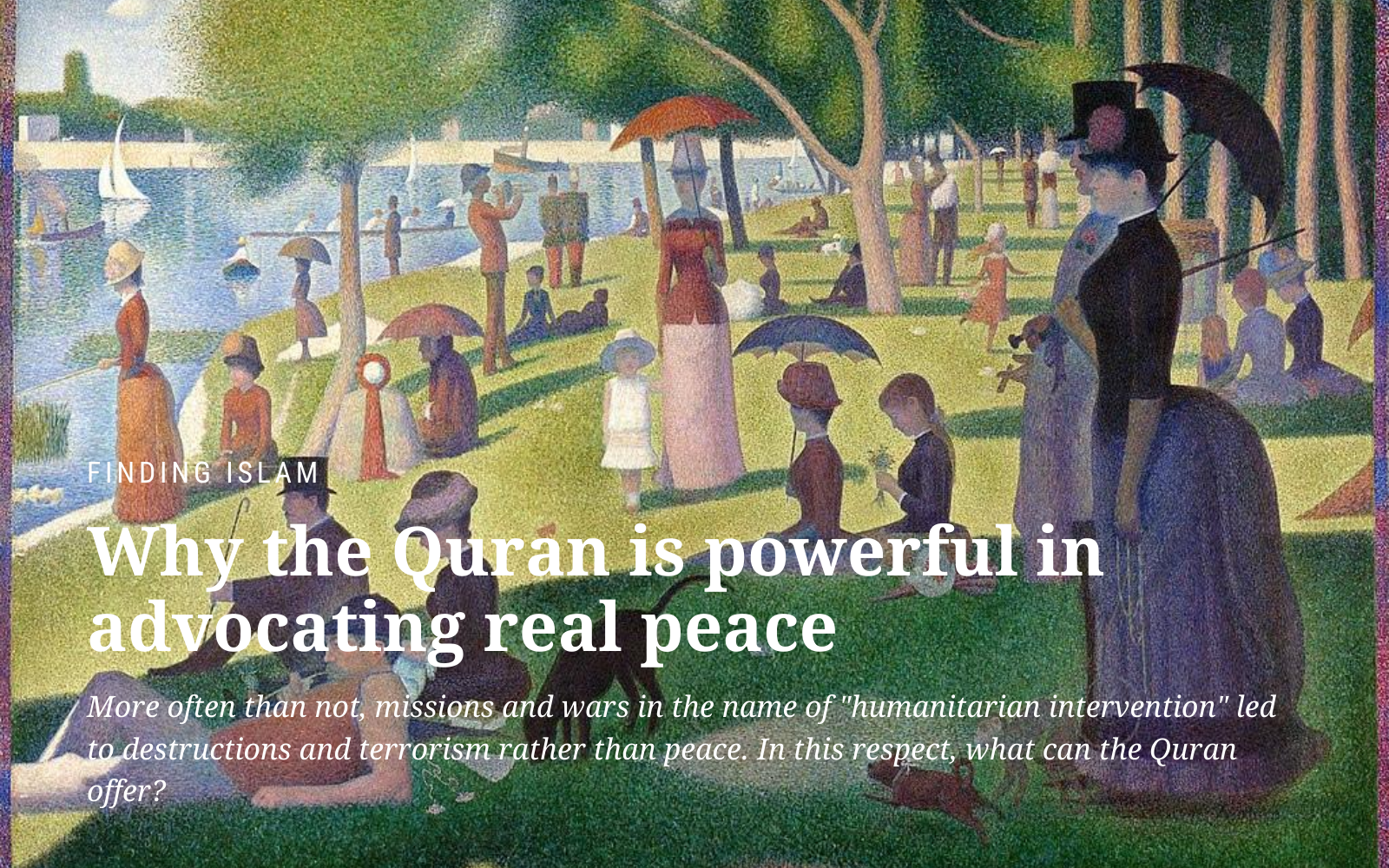 Why the Quran is powerful in advocating real peace

Published by asyhadu on September 1, 2020

More often than not, missions and wars in the name of “humanitarian intervention” led to destructions and terrorism rather than peace. Take for example, the American invasion of Iraq under the pretext of “war on terror” was more towards plundering the oil reserves in Iraq. Also, the so-called “white man’s burden” was used to cloak the greedy desires of the West to control South East Asia. The 20th-century Japanese military tactic which shouted to bring an earthly paradise to China and South East Asia was none but to fool the people into accepting their “friendly invitation” (read: colonization).

Americans had their slogan “the American dream”. Europe had “white man’s burden”. Japanese had “Asia for the Asians”. Actually, even if the intention is sincere to bring peace, it can easily be hijacked by those with evil intentions.

Recommended read: Make the people serve you in 3 easy steps (and control the world)

The same unfortunately goes with religion. Many churches are known to be a place of sexual abuse by priests. The Shiites (especially the Twelvers) control every religious doctrine through their Imamate. ISIS, a notorious example today, raped and killed by ‘religious justification’. The Sunnis also do not escape this fault. Through their four grand imams that they semi-worship, they justify stoning and killing of apostates.

Morality (good and bad) does not exist without God. That is why we all see the Americans justifying what is wrong to be right and what is right to be wrong. Examples include usury, virtual economy, gay marriage, inequality, plundering the energy resources of the Middle East, and ultimately, global domination with the alliance of Israel (the Judeo-Christian alliance as explained in Quran, 5:51).

Abuse of religion also happens because of the lack of clarity in the sources and methodology of guidance and law. Muslims today only follow what is passed down from their ancestors. Practically there is no measure to know whether they follow the religion correctly or whether they are simply following other’s projection of that religion. Islam, which was meant to liberate from dogmas of man, now becomes the dogma. This has caused serious confusion in the Muslim minds: Which Islam is the right Islam?

How is the Quran different?

This is where the Quran comes in. Only the Quran provides the right and clear meaning of peace, along with provenly successful methods to achieve it.

To understand why the Quran is powerful in advocating real peace, what is needed first is to understand what is the Quran. The Quran is the revelation or message from God to humans. Its function is to guide man to the right path.

The month of Ramadhan [is that] in which was revealed the Qur’an, a guidance for the people and explanations of guidance and criterion.
(Quran, 2:185)

We can learn from verse 2:185 the Quran acts as
i) Guidance
ii) Explanations of guidance
iii) Criterion (measure to differentiate right and wrong)

By the Quran, unjust wars and colonialism will be check and balanced by those who read the Quran, as the Quran only allows wars in self-defence and liberating the oppressed. The Quran does not allow war for economic advantages even in the name of national security (unless there is clear oppression).

And if they incline to peace, then incline to it [also] and rely upon Allah. Indeed, it is He who is the Hearing, the Knowing
(Quran, 8:61)

Fight in the way of Allah those who fight you but do not transgress. Indeed, Allah does not like transgressors.
(Quran, 2:190)

These are, among others, clear standards taught by the Quran for us to adhere before initiating war. Contrarily, those who do not follow the Quran simply wage war in the name of national security. Apparently, what “national security” meant to the United States was controlling a large portion of Earth (known as Grand Area) for global (military & economic) hegemony.

Just to reiterate for those still doubtful, what is the difference between the Grand Area doctrine and the Quran’s war policies, when both are for what is called “national security”? The difference lies in the standards set by the Quran, as shown. Quran 2:190 set the standard that “transgressing” means fighting those who are not fighting you. The Grand Area doctrine justifies any kind of fighting (or at least unclear about it) as long as the objectives are reached.

There shall be no compulsion in the deen (system). The right course has become clear from the wrong. So whoever disbelieves in Taghut and believes in Allah has grasped the most trustworthy handhold with no break in it. And Allah is Hearing and Knowing.
(Quran, 2:256)

It is not the job of Muslims to subjugate other countries to change its system to a system based on Quran, although we know that the Islamic way of life is the only humane and successful way of life.

Other ideologies might fall into the wrong human idea that we should force others to do what is right. This is not always right. Respect of liberty for others is also an important recognition. In fact, it is a voluntary act that makes an act meaningfully righteous or evil. The communists committed this mistake when it forced everyone to denounce their religion and killed and tortured anyone that is unfaithful to the state. Such a force cannot produce a committed communist society.

If man creates standards to be followed by themselves, it will lead to many troubles. Man do not have total knowledge and wisdom, therefore, setting up standards will either be too relaxed, arbitrary, or strict. Sometimes, even contradictory to each other!

Man will always have the natural tendency to rely on something that is more knowledgeable and wiser than him.

All in all, only the Quran can claim it has the right ideology and system because its source is none other than the Creator/ God. Whether you agree the Quran is from God or not, still, the argument is that the Quran has a sound source. Man-made ideologies, on the other hand, are purely arbitrary and built on thin air. It is only built on sentiments and very limited experience, and sometimes, stolen from religion (example: human rights were originally Christian doctrines).

The Quran in guiding Muslims themselves

The truth today, even Muslims have abandoned the Quran by reducing the funtion of the Quran only for the dead, when the Quran is actually a guide for living! That is why the Muslims are in such a failed state and falling apart. But the most worrying thing is that Muslims are divided into many sects.

Why does this division happen? There’s a myriad of reasons but a notable one is the obsessions of some Muslims to their imams and sects. This has made the Muslims away from the Quran and more towards obeying their sect leaders. This is condemned by the Quran:

Follow what has been revealed to you from your Lord and do not follow guardians besides Him, how little do you mind.
(Quran, 7:3)

Muslims therefore are more prone to follow secondary and tertiary sources like books of hadith, books of opinions of scholars, and so on, rather than depending on the Quran and seeing the Quran as the source of highest wisdom.

Such events also has potential to lead to religious exploitation. The Quran condemns such a thing:

Who is then more unjust than who forges a lie against Allah or (who) gives the lie to His communications? Surely the guilty shall not be successful.
(Quran, 10:17)

This has made Muslims think that anyone who leaves Islam needs to be killed when the Quran does not sanction such actions! Contrarily, the Quran actually supports freedom of belief to the extent that it does not endanger the (Islamic) state and the public (Quran 2:256).

Recommended read: Follow ulama or follow the Quran? – Drawing the line
Taking Religious Scholars and Monks as Lords Besides Allah: Learn from the Mistakes of Christians and Jews

So, [O Muhammad], We have only made Qur’an easy in the Arabic language that you may give good tidings thereby to the righteous and warn thereby a hostile people.
(Quran, 19:97)

And indeed, We have eased the Qur’an in your tongue that they might be reminded.
(Quran, 44:58)

The book of God is our only hope to achieve progress and peace in our lives. It sets clear standards and criteria for humans to follow to have a life blessed by our Lord (peaceful life). Nevertheless humans today are too arrogant to follow God’s instructions and therefore must face what they have done by their own hands.

The Quran is powerful because only with it humans can access the direct words of God to lead a righteous life. It also acts as check an balance between the evil ones and those who read the Quran.