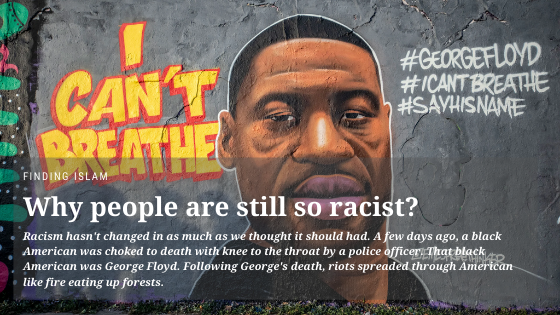 Why people are still so racist?

Racism hasn’t changed as much as we thought it should have. A week ago, a black American was choked to death with a knee to the throat by a police officer. That black American was George Floyd. Following George’s death, riots spread through American like fire eating up forests.

But that’s not all. After more than six decades since the landmark court judgment in Brown v Board of Education, which held that racial segregation as unconstitutional, still racial segregation and injustice exist. Not only blacks are suffering, but even the original Native Americans, Hispanians, Muslims, and women are not getting equal opportunities.

Of course, being poor hurts the worst in America. In a far-right economy, the poor-rich gap can never come to a near. The reality, the ones who are backward should be helped the most. These people are far left behind in this highly competitive society. Poverty leads to an unending vicious cycle that is almost impossible to escape: Poverty leads to a lack of education, which in turn causes more poverty which makes them far behind in the race.

It is not coincidental that Blacks are also among the most poor too. Historically, they work as slaves, oppressed by the KKK, and not given equal job opportunities even after slavery was abolished.

Now that’s only in America, what about globally?

The diagram above says it all. It is not coincidental that Africa is the poorest continent on Earth. Africa was the center of apartheid by the West back in the 1900’s. The truth is there is no such thing as equality in this 21st century.

Why do we have to wait for a black man to get killed on camera to voice out against injustice? How many people more have to die until there is change (if there will ever be)? Seriously, do we need riots to spread throughout a country, an SUV running down police officers, rioters to threaten to kill whites, only then we can get our voice recognised?

The problem cannot go away by simply changing or giving “rights” to the people. We have seen until today that eventhough racial segregation was declared unconstitutional in America, racial discrimination still happens. The problem is in the way we think and the education system we are in. This is called ‘worldview’. The worldview today is that status and money are being worshipped, but above all ego is being worshipped the most. Is there any confusion then why people are so racist?

The root of the problem is ego. Arrogance and ego blinds the people from the truth and subsequently blinds people from accepting that other people are suffering so that they can continue to enjoy their status and wealth.

With ego, people justify their wrong actions by saying that other people are poor because they are lazy and poor. With ego, they say that they deserve their wealth because they worked hard when the truth is that they are just lucky, and others are not as fortunate as him.

All praise only goes to the one who deserves it- the Owner and Creator of the Universe. He has created for man crops that he eats from, animals that they get clothing and meat from, the seas where they get their proteins and jewels from, the skies where they get their rain from. Yet man uses these provisions to block others from having a share of God’s sustenance! These people make use of their wealth to monopolize the resources of wealth.

When we shift from ego-worship to God-worship we will understand that Earth is a God-given resource for man as a whole, not only for a specific nation or people. When we understand that it is God who gives provisions, we will not say “we deserve it because we worked hard for it”. The truth is, the Rabb (Sustainer) is the one who expands wealth for whom He wills and He constricts it from whom He wills.

But this is not the case today. Not even in Muslim-majority countries who claim to believe in God yet they exploit the wealth of others. Racism is still prevalent. An example is when many Malaysians say that it is better to leave refugees dying in the open seas rather than letting them into their borders and giving shelter, just a month ago.

In Muslim-majority countries, usury is still at the pedestal. Education is expensive. Student loans are means of getting money. Students have to pay extra money for studies. People have to work harder just to get a roof on their head. Meanwhile the bank owners are siphoning money as they just laze around and enjoying. Is this Islam? Is this God-concious (taqwa)?

Have you seen the one who takes as his god his own desire? Then would you be responsible for him?