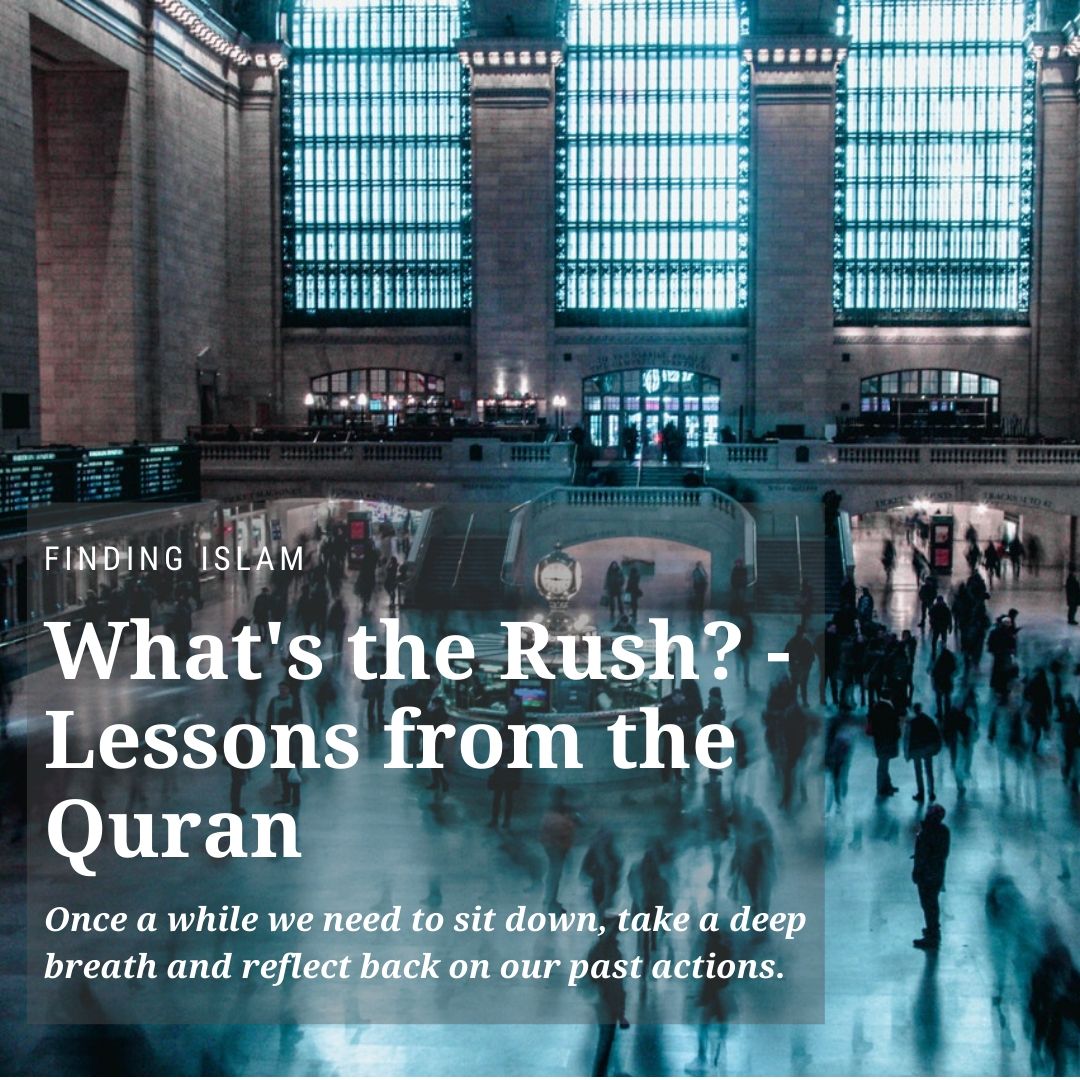 What’s the rush?- Lessons from the Quran

These busy few weeks have taught me a lot about not being too busy with my life. Once a while we need to sit down, take a deep breath and reflect back on our past actions.

In the Quran, chapter of Luqman, the advice of Luqman to his children was recorded to say “And be moderate in thy pace…” (Quran 31:19). I stumbled upon this verse a few times before, but I didn’t really understand what it was about. But on one particular night, while i was looking through the ‘recommended’ videos section in YouTube, there is a video about a non-muslim lady reading the translation of the chapter of Luqman and giving her own views.

She commented on the verse: she shared her experience about how she used to work at this one restaurant where the workers are constantly on the move to serve the customers, how they would take multiple shots of espressos and she described the situation like a ‘basketball game’ because they had to move really fast. She really didn’t like the experience and told the viewers that ‘the Quran has a point.’

Now I was experiencing this myself. Currently in college, joining too many programs and activities, along with the classes and stacking pile of coursework- made me feel disconnected. It made me feel as if I don’t know where I am going, like I suddenly forgot what I was fighting for in the first place. I didn’t have time to reflect on my activities, to plan my move forward, because each day is leaving the hostel early in the morning and arriving at night. I felt like I’m a living corpse doing the things that I had to. Most importantly, I felt disconnected to God. The lady was right- the Quran has a point.

This made me remember over and over again about the lady’s commentary. It made me think and slowed myself down. I tried to take a closer look at the verse and look to other commentaries on it (I’m a huge fan of Quranic commentaries). One that caught my attention is Syed Qutb’s rendering of the verse as “Be of modest bearing in your walk“ where the modesty is expressed in Arabic with the word iqşid, which connotes economy and definite purpose. The economy aspect referred to here is the need not to waste energy in a boastful, arrogant gait, and the purposeful walk is one which does not waste time; rather it moves towards its goal easily. Similarly, renowned Muslim commentator-philosopher Fakhruddin al-Razi’s view is that, combined with the injunction to ‘lower thy voice’ (in the following part of the verse), it can be understood as to be moderate and deliberate in all of one’s affairs.

The Quran continues to say that “indeed, the most disagreeable of sounds is the voice of donkeys.” This is not to say that God hates donkeys, but those humans who act like donkeys.  Donkeys are animals who merely follow the orders of their masters without thinking. They only ‘follow the flow’. Their voices are meaningless, not bringing any good to anyone. They do their job, but meaningless.

In this age of information, where speed and access matters too much, in fulfilling its needs, we tend to forget to sit back, reflect, gather our strength, and deliberate our actions to align with our sole mission on Earth- to serve the One True God. People leave their homes early in the morning, taking the traffic jam, taking the transit, during the ‘rush hour’, hurrying to get to work on time. They do not have the time to think and remember God. They are like donkeys.

Speed and productivity is important, but the Quran teaches us to never overestimate our capabilities (over-working, or thinking what we are doing is always right), and to iqsid our pace so that we are in the right direction.

“O you who have believed, let not your wealth and your children divert you from remembrance of Allah . And whoever does that – then those are the losers.” – Quran 63:9.