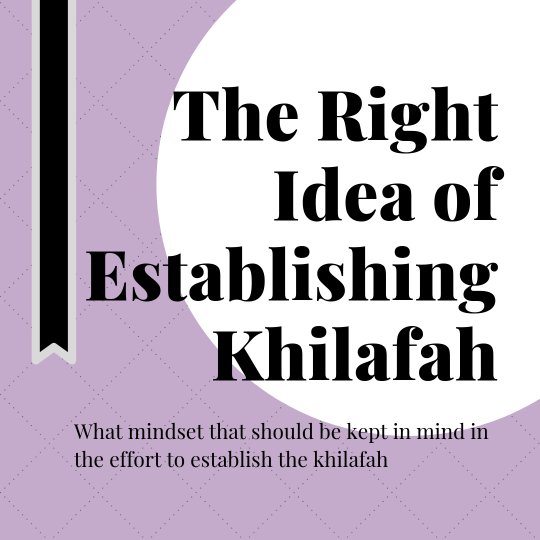 The Right Idea of ‘Establishing Khilafah’

بسم الله الرحمن الرحيم
With the ‘ism’ of Allah, The Most Compassionate, TheMost Merciful

Often times those who strive to establish the khilafah got the wrong idea about what it actually means to do so. When talking about khilafah, most often get the idea of establishing a country, the idea of political-ism and states come to mind, the picture of political might and military power. The rulership of the Muslims on the face of this Earth.

Although it is true that with the khilafah Muslims will be the powerful people on Earth, but that shouldn’t be the idea of a khilafah. The purpose of this article is to revisit the real view that should be put in mind in the divine mission to uphold the laws of Allah on the face of this Earth.

A khilafah is popularly known as an Islamic state. It should be noted that the duty of Muslims is actually to uphold the system (deen) pleased by God, not to establish khilafah per se.

What is the right idea we should have in ‘establish khilafah’?

If it is wrong to think the mission of khilfah as a mission to restore the glory of the Muslims, then how should we think about it?

Look at the Sirah and the Sunnah of the Prophet saw. Look at the pattern of his mission in establishing the deen/ laws of Allah. During his prophethood in Makkah, Rasulullah did not preach to his followers to ‘establish a state’. The essence of his message that time was tawheed, the Oneness of Allah, belief in the Last Day, and belief in the prophets of Allah. Although the prophet knew that an independent state is required in order to fully establish the deen pleased by Allah, he focused more on the belief part of the Muslims rather than ordering his followers to establish a state. This is because their strength in ‘belief’ in the Oneness of Allah, will automatically lead them to voluntarily submit to Allah in every matter.

This is the real idea of an Islamic state. It’s not really about the state, but about the Oneness of Allah. The jihad to establish the khilafah should be done under the banner of ‘La ilaha illa Allah’ not under the banner of ‘establishing khilafah/state/Islamic country’. In other words, the belief in God should be the driving factor for Muslims to establish an Islamic state, not because the desire to have the state itself. It should start from the inside (belief) out (action).

There’s no need to imagine powerful countries, political power, all those military political stuff when it comes to khilafah. Just the strong will to solely submit to Allah should be enough.

Why is it wrong to establish khilafah not driven by tawheed?

There would be a false idea that Islam is about establishing khilafah. It is not. Instead, Islam is about upholding the Oneness of God. Consequently, upholding the Oneness of God means to fully submit to the laws of Allah ONLY. It should be understood that way, we should have the tawheed first then that tawheed will lead us to fight in the path of Allah to establish the system (deen). It should not be understood the other way, where khilafah is established first not driven by tawheed but by sheer desire for Muslim victory. This is wrong, we shouldn’t establish the khilafah for showing off or the pride of the ummah, but we should do it solely because of Allah and nothing else. In fact, to do something because of a reason other than Allah would be tantamount to syirk.

Islam is simple, everything sprouts from the inner self. The belief in God should be the driving factor for Muslims to establish an Islamic state, not because the desire to have the state itself. That is why the prophetic mission of Muhammad (saw) started with education and belief. That is why the Makkiyyah verses stresses on belief and arguments with the disbelievers. WHEN the belief and will for jihad is strong, then all the other challenges can easily be overcome.