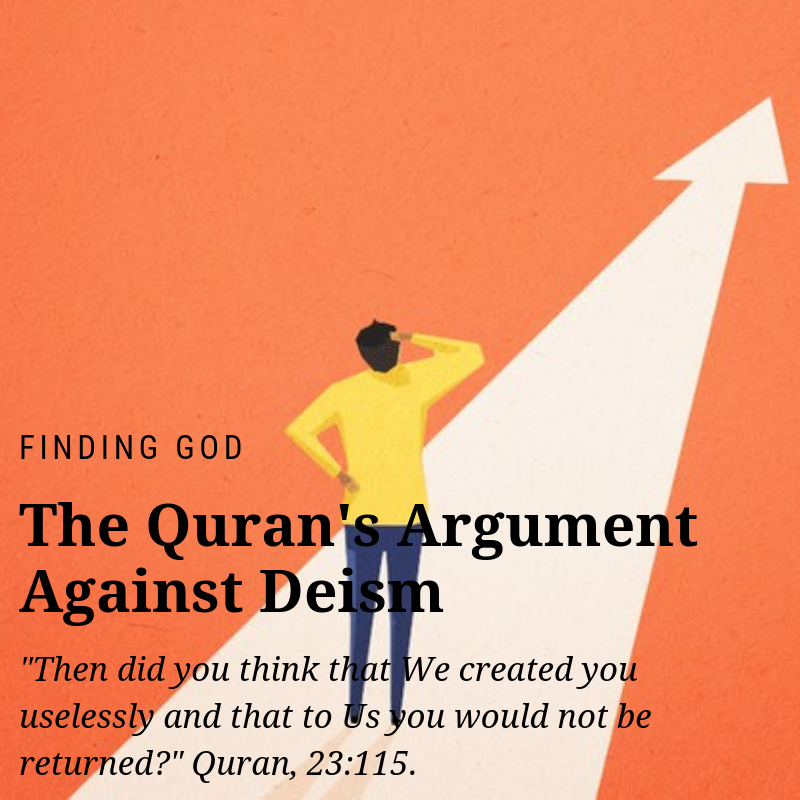 The Quran’s Argument against Deism

The Qur’an argues in a very unique way. It doesn’t straight away give you the answer, but it strikes the heart with questions. The Quran, instead of spoonfeeding humans with the answer, it enjoins upon man to think and find the answers for themselves. The Quran only sparks the interest of man, but it is man who finds the answer.

The verse above said to us that the signs are for those who of understanding (ulul albab). Who are the ulul albab- the ones who remember about God all the time (standing, sitting, lying), and constantly think about the universe. These people are the people who realise, in true reality, that God does not create things aimlessly unlike the deist’s claims.

This is where we talk about the Quran’s argument against deism.

The universe was created for fun?

The Qur’an told us to question ourselves, is it even sensible to think that God would create anything aimlessly? The God who created the universe with incredible precision, intelligence and beauty… created man for fun?

DNA contains the blueprint for all life and it is by far, the densest information storage mechanism known in the universe. The amount of information contained in a pinhead volume of DNA, will fill a stack of books 500 times higher than from here (Earth) to the moon. The program code and design of such an incredible system indicates a supremely intelligent designer.

Antony Flew, a staunch atheist who defended atheism for 50 years, finally acknowledged the existence of God, and believed it has to be an “infinite intelligence”, due to the scientific discovery of the supreme complexity of DNA.

One would not have to look at DNA just to appreciate God’s stunning intelligence and wisdom. Even looking at His ‘simple’ creations can suffice. He has created for us the sun which is the ultimate source of energy on Earth. He has created the night, which stimulates the production of melanin in the body for us to rest (Quran, 6:96), and day, which stimulates the production of serotonin for wakefulness.

God created the cycles of day and night for humans to calculate time. He has created the stars so we may know the direction (Quran, 6:97), so as the seas for various benefits (Quran 16:14), and the variety of plants and fruits for different purposes that benefit man (Quran 16:11), cattles for food, clothing, and transportation (Quran 16:5-8), mountains for geological stability (Quran 16:15) all of these which has purpose to make Earth not only habitable, but also hospitable for man.

The wise man asks: “Why would have God prepared for me all of these?” Nature has made it possible for man thrive and build wonders.

خَلَقَ السَّمَاوَاتِ وَالْأَرْضَ بِالْحَقِّ ۚ تَعَالَىٰ عَمَّا يُشْرِكُونَ
He has created the heavens and the earth with truth: Far is He above having the partners they ascribe to Him!
(Quran, Al-Nahl, 16:3)

“…with truth” implies that everything in the universe, is meaningful and not accidental, to fulfil a definite pupose in accordance with His planning wisdom.

Indeed, there are so many more signs. God has created the Earth to contain oil and precious metals like tin, which brought to the industrial revolution and made man progressed in heights of technology. Medicine, automobile, smartphones, are all only possible with His mercy that He planned the Earth to contain these materials.

“And if you would count Allah’s favors, you will not be able to number them; most surely Allah is Forgiving, Merciful.” (Quran, 16:18). “We will soon show them Our signs in the Universe and in their own souls, until it will become quite clear to them that it is the truth. Is it not sufficient as regards your Lord that He is a witness over all things?” (Quran 41:53).

It should be clear now that life isn’t purpose-less, it has meaning. But can we create the purpose, instead of living according to the purpose God had?

Purpose of life in Deism?

No matter what purpose we created for ourselves, be it wealth, love, power, fame- it is useless, because in the end we will all DIE. Everything will be returned to dust. It’s like playing video games trying to accumulate more score points, but the game will end and- it just ends. That’s it.

And you know what? Quran described the worldly life just like the game:

“Know that the life of this world is but amusement and diversion and adornment and boasting to one another and competition in increase of wealth and children – like the example of a rain whose [resulting] plant growth pleases the tillers; then it dries and you see it turned yellow; then it becomes [scattered] debris. And in the Hereafter is severe punishment and forgiveness from Allah and approval. And what is the worldly life except the enjoyment of delusion.“
(Quran, Saad, 57:20)

Those who are wise and put deep thoughts into it know that life is temporary. It is just pointless.

Man recognizes that the material world is not everything. The world cannot fully satisfy him. Just like how a poor man wanting to be rich. When he succeeded being rich, he will lose interest in his wealth. And so as the young man who longs to meet his girlfriend and to marry her. But once he succeeded to tie the knot, after some time the feeling of ecstasy and interest begins to fade away. Man always wants more. Man is always eager to rise to sublime heights.

But through contemplation, he realises that the material world appears trivial and unworthy. “As a consequence, he becomes convinced, intuitively rather than intellectually, that this material life is not the ultimate goal and that there is beyond doubt another world beyond this. This is the world which our souls yearn for and try to reach, but the human body becomes an obstacle and hampers its efforts”. [2]

Everything boils down to this: If God is very Knowing and Wise, why won’t He communicate with us? Doesn’t God love us? Why would He let His own creations to be confused? An All-Loving God would not let that happen.

That’s why the Quran said:

God is not indifferent to man, God does not abandon man. God programmed man to search for God, through the incredibly inexplicable intelligence of God displayed in His creations, and through man’s inner yearning for a next metaphysical world that will satisfy him. Deism is not only opposing man’s innate disposition (fitra), but deism is also a highly erroneous view that believes the Most Wise and Intelligent created man and the universe aimlessly.

The Deism worldview can be destroyed in only one sentence: it is purely philosophical. It has no other proofs to support that the idea that God wants us to merely use reasoning without any guidance. Read more on why deism fails.

Deism- Would God Not Communicate with Humans?– asyhadu.com
Why deism Fails as a Philosophical Paradigm– godandscience.org