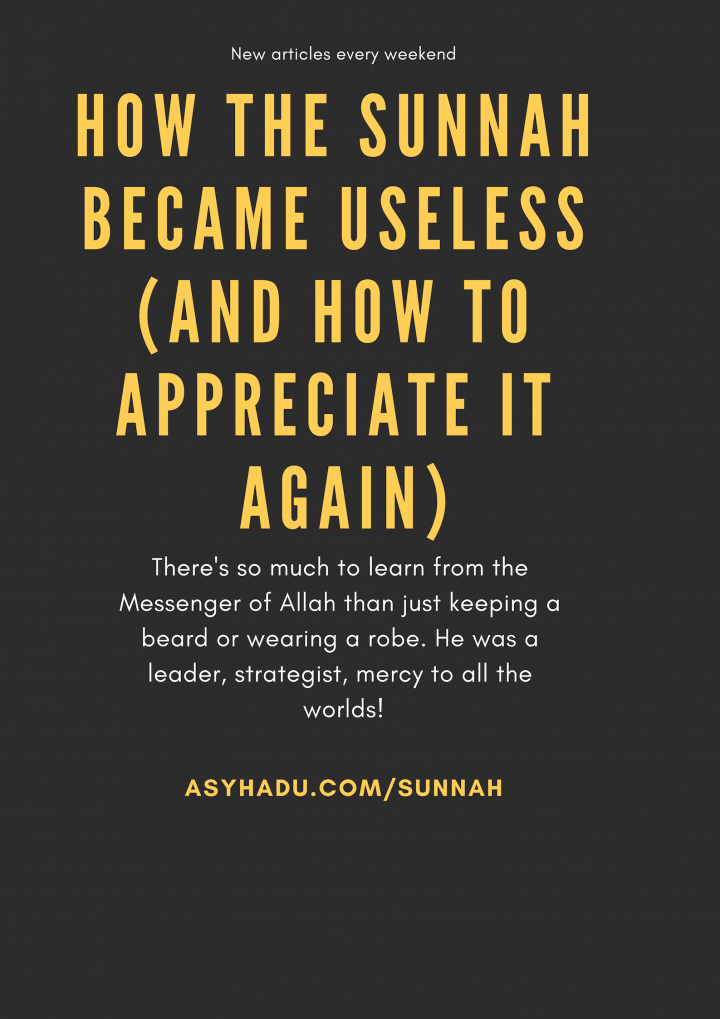 How the Sunnah Became Useless (and How to Appreciate it Again)

Published by asyhadu on December 8, 2018

When we say Sunnah the things that often come to a Muslim’s mind are like: keeping a beard and attenuate the mustache, wearing jubah (the robe Arabs wear), using siwak to brush the teeth, oiling the hair, eating dates, eating olives, sleeping on your right side, etc. Don’t they see the other qualities of the Messenger of Allah?

Out of all the brilliant characteristics behind the man who established the Islamic state of Madinah all we can learn form him is eating dates? The Islamic state of Madinah that were rivals to the Roman and Persian Empire (if compared to today, they’re Europe)  and all we can learn from the man who established a civilisation which eventually defeated the two world’s greatest power of those time is- keeping a beard?

If you want to be a successful businessman like Steve Jobs, would you keep a beard like he did or would you carefully learn about his life and how he turned from a college dropout into revolutionizing the industrial technology of the world today?

There’s more to the Sunnah than just keeping a beard

There’s so many things we can learn from the Messenger of Allah rather than just keeping a beard, like:

a) the strategies he used to build the Islamic State of Madinah
b) his brilliance in making the Muhajirin and Anshar as brothers and sisters in faith
c) his leardership
d) his statesmanship (like coming up with the written constitution of Madinah)
e) the method and meaning of Hijrah (not just spiritual but also physical)
f) strategies used in wars
g) how he upheld the Deen ul-Islam
h) most importantly, the manifestation of Tawheed (because most of us don’t know how to manifest Tawheed although they hold on to Tawheed)

Even worse, we use the Sunnah of others beside the Messenger to uphold Islam. For example, Malaysians want to implement Islamic law in Malaysia but they use the Sunnah of British, (Parliamentary System) to approve the Islamic law. Did the Messenger of Allah joined the Dar un-Nadwah (the place where the Quraisy elites gathered to settle issues like modern day parliament) to uphold Islam? Besides, PAS wants to uphold Islam too but still they are stuck under the Federal government that follows the legal and political system of the West.

That’s why efforts to uphold Islam see no light

This explains why the efforts to uphold Islam has always failed the whole time, because we do not follow Sunnah of Messenger in the first place. Don’t you see to enforce ad-Deen ul-Islami is very simple, it has already been laid out for you! You just have to study.

As Muslims who believe in the Hereafter, we have to conduct a more critical study on the Sunnah of Rasulullah. Allah has sent down His Book, prescribing all the laws in it, and the function of His Messenger is to demonstrate in a practical way how the laws and teachings in the Book of Allah can come into reality.

If you feel interested to know more about the Sunnah of Rasul or want to discuss about it, don’t hesitate to contact the author of the article (which is me). I enjoy such discussions.

What is right is from Allah, and what is wrong is from me and syaitaan. Allah knows the best.