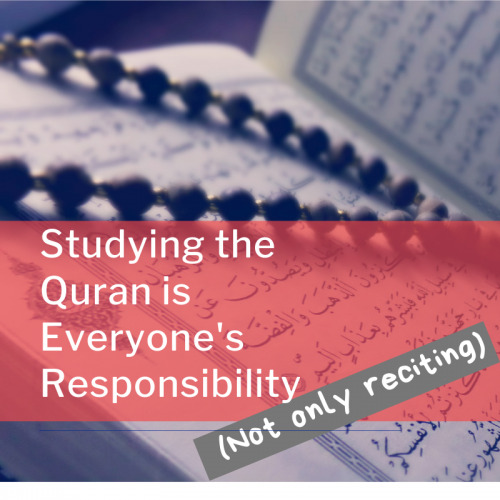 Studying the Quran is everyone’s responsibility

بسم الله الرحمن الرحيم
With the ‘ism’ of Allah, the Most Merciful and The Most Compassionate.

As stated earlier popular belief is what is causing humans to be far from the Quran. What I mean by this is the understanding of some people who view the Quran only as a book of songs and poetry. Or a book of blessings without taking it as guidance. Or a book to only give supplication to the dead. Or a book to be read. But they never try to study the message of the Quran.

Why do we stress so much reading the Quran is Arabic without looking at its translation? What’s the use of reading then? If a German author writes his book in German, then non-German speakers would read the translation of his book. But when it comes to the Quran, why, do some Muslims not even bother to read its translation? Are they trying to dishonor the Quran?

Amin Ahsan Islahi, one of the greatest scholars in Islam, said (as cited by Israr Ahmad Khan) that those who use the Quran only for the dead, for ‘blessing’, for holy water, are having something that can bring down the fortresses of satan but only using it as pesticide. [1]

We need to understand that Islam is not a tradition. Islam is not defined through popular belief nor through what our parents say it is. “And when it is said to them, “Follow what Allah has revealed,” they say, “Rather, we will follow that which we found our fathers doing.” Even though their fathers understood nothing, nor were they guided?” Quran, 2:170.

“The companions would never recite the Quran only for the sake of blessing, putting aside reflections over it. Recitations of the Qur’an only to get blessing got introduced from the time when people began treating the Qur’an as a book of blessing instead of guidance. It was when the Qur’an’s use was confined to easing the pangs of death, crediting rewards into the account of the deceased, inaugurating even sinful acts so as to turn the sin into good deeds, and making it a talisman to ensure the safety in the cause of people’s worldly undertakings.” – Amin Ahsan Islahi, quoted by Israr Ahmad Khan in “Understanding the Quran: A Refelction.” chapter 2. [1]

Those who do not want to study the Quran are the residents of Hell;

So which one do you choose? Hell or Paradise? Allah or Taghut? Quran or man-made book?

Dear readers, Islam is not a religion that you can get for free. Just because you were born a muslim, doesn’t mean you’re a mu’min (believer). Belief (iman) requires conviction and lots of investigation. And it can only be achieved through the study of the Quran.

Following the masses will not lead you to the truth (Quran 6:116). Not even following your parents (Quran 2:170). Not even blindly following ulama’ (scholars) (Quran 9:31). In fact, if all Muslims study the Quran as their ‘map of life’ it can act as a check-and-balance to Islamic scholarship/ authoritarianism/ clergy.

The Quran needs to be studied because it contains clear evidence of Islam “And thus have We sent the Qur’an down as verses of clear evidence and because Allah guides whom He intends” Quran, 22:16. The Quran needs to be studied “And We have certainly made the Qur’an easy for remembrance, so is there any who will remember?” (Quran, 54:17,22,32,40), and we need to follow the Quran and nothing else “Follow, [O mankind], what has been revealed to you from your Lord and do not follow other than Him any allies. Little do you learn.” (Quran 7:3)