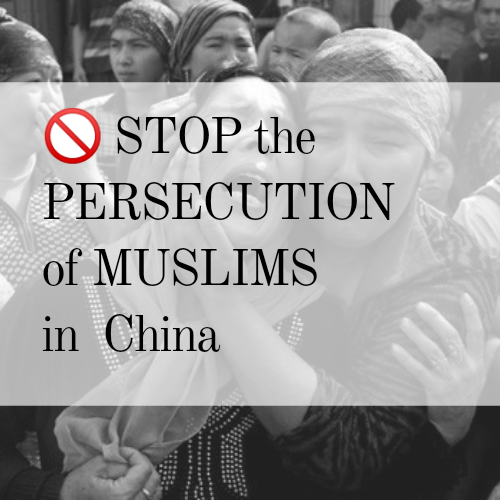 🚫 STOP the persecution of Muslims in China

Did you hear the news that a mosque in China was destroyed by the authorities, and many injured? No? You didn’t? That means the world has been silent about the persecution of Muslims in China.

Do you know about the Uighur Muslims in China being held in detention camps, beaten by inmates and guards, and raped? You know how many Muslims are in there? More than ONE MILLION.

It is a responsibility for Muslims to fight in the way of Allah, not to mention when there are Muslims being beaten, gang raped, and killed for sheer pleasure.

Al-Nu’man ibn Bashir reported: The Messenger of Allah, peace and blessings be upon him, said, “The parable of the believers in their affection, mercy, and compassion for each other is that of a body. When any limb aches, the whole body reacts with sleeplessness and fever.”

Something must be done to stop this. But to solve a problem we need to know the reason, why this happen, how this could happen?

Muslims today are no longer united. They do not have a leader/imam that will secure the development and safety of Muslims. Muslims today are left weak and vulnerable. There’s no mechanism to stop these oppression from happening.

On the other hand, those Muslims who are not persecuted or oppressed are living comfortably in their homes.

Those Muslims are ‘drunk’ in the pleasures of worldly life. So drunk and drowned to the extend that they do not care about what is happening to their brothers and sisters- not only Muslims in China, but also in Syria, Palestine, etc. They don’t want to think about other’s problems but only care about their own stomach and wallets. They think that by making doa and giving donations they are solving the problem, but they are actually only creating fake solutions to excuse themselves from the real jihaad.

Another factor is that Muslims today are committing shirk by having man-made ideologies as their gods besides Allah. How can we expect Allah to help us when we ourselves are associating God with man-made political systems? (Na’uzubillah min dhalik)

Action must be taken, I don’t mean donations. They’re temporary solutions. A holistic, visionary and proven course of action is needed- something that provides a real mechanism, and most importantly- driven by divine knowledge and wisdom. This is because this issue cannot be looked singularly out of context with other evils. To solve an evil problem requires us to solve other evil problems once and for all, otherwise, they’re only temporary solutions.