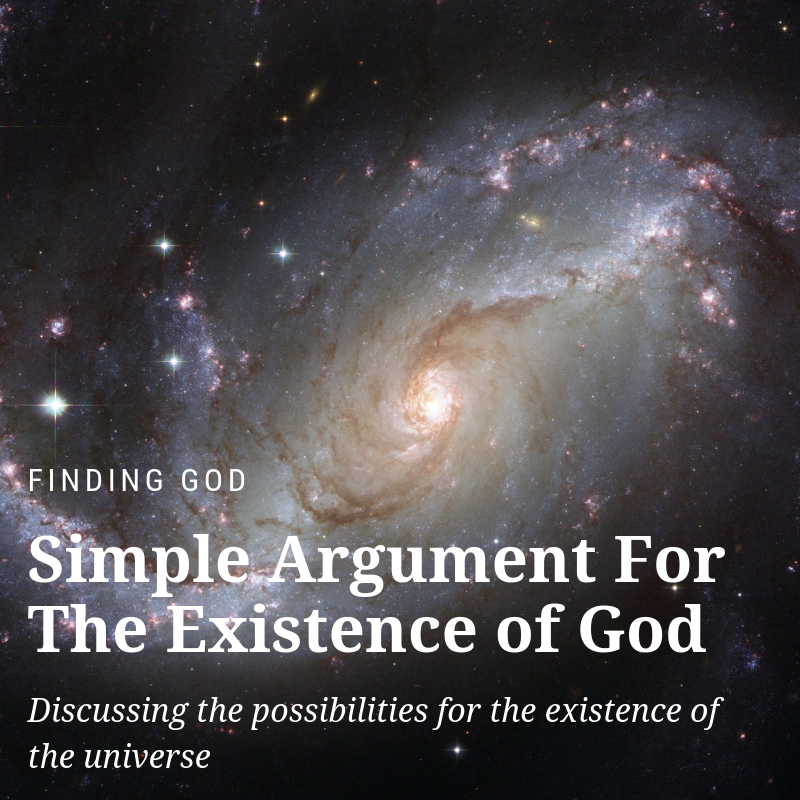 Simple Argument for the Existence of God

Does the universe has a creator? – An old question humankind has always attempted to answer.

There are 4 possibilities how the universe came into existence:-

Let’s go through one by one.

1. The Universe was created out of nothing.

Can nothing cause something?

No matter how long- nothing can only cause nothing… because there is no cause!

Look at the natural world around you. Look at the birds- their body has feathers and muscles designed to fly, so they can fly.

Look at falling things- they are caused by gravitational force.

Look at anything in the universe- they all live by a set of rules- rules of cause and effect (a.k.a science).

But how come when it comes to the existence of the universe, one can say that it is created out of nothing?

2. The universe created itself

This, is obviously self-contradicting.

If the universe wants to create herself, she must have existed in the first place.

3. The universe has always existed

Meaning, the universe has no beginning, it has always existed, infinity.

This makes the kalam cosmological argument comes to mind. It was first founded by Imam al-Ghazali in the 12th century. It was further strengthened by William Lane Craig, a famous Christian debater and researcher [1].

Anything that begins to exist has a cause- is it true? Well, as mentioned earlier, everything in nature has a cause. Although it is an inductive conclusion*, it is a very probable one. And so far there is no proof that something can exist without a cause. Let alone proof, there aren’t any observations to make such a hypothesis !(that something can exist without a cause)

What is infinity? – It is the concept that something is ever-ongoing. Endless and beginningless.

But does infinity exist in reality?

That means, we can make up the concept of infinity in our own mind, but it cannot be realised.

Since infinity is impossible and absurd- can the universe be infinite?

To strengthen this premise, there are scientific discoveries that support this, like the Big Bang Theory and the Second Law of Thermodynamics.

Critics argue that the Big Bang Theory doesn’t say that the universe has a beginning, but actually an infinity. The more appropriate name for it should be “the big stretch” (because it was never a ‘bang’ out of existence, but an expansion, infinity-ly expanding – stretching). To understand more, watch:

Fair enough. They may accept their theory of big bang to be infinite or finite. Either way, both are not conclusively proven yet. But I have explained earlier why actual infinity is absurd and impossible.

Moreover, saying the universe has always existed implies that the universe does not has a cause, and I’ve reasoned why that is absurd in the first possibility. Are we to say that the existence of the universe must be exempted from the law of nature?

This is what is called ‘infinite regress’[2]. Similarly, if the universe has no cause, it shouldn’t have existed in the first place. But, hey, whad’ya know? Here we are! We exist!

Conclusively, the two premises of the Kalam argument is logical and it logically follows that the universe has a cause.

“But if God created the universe, then who created God?”

A good question which will also be further answered in the next possibility.

4. There is higher power governing the universe.

Is there? Let’s see.

Considering out all the other possibilities, this is the only logical possibility. If the universe cannot exist without a cause, does not create itself, and has a beginning;- therefore there must be an ‘originator‘- something that initiates the universe.

But if God is the one who caused the universe, who caused God? Well, by definition, God has no cause, that’s why God is called “God”. God is transcendent, and cannot be comprehended by the human mind. It is beyond our boundary of intelligence.

This is fully in accord with the Islamic description of God:

Say, “He is Allah, [who is] One,
Allah, the Eternal Refuge.
He neither begets nor is born,
Nor is there to Him any equivalent.

“Say, “He is Allah, [who is] One,” the chapter begins with the introduction of Allah. Who is Allah? He is Ahad (One). He is only one. In other words, unique. Nothing is like Him. The only One.

“Allah, the Eternal Refuge.” The term As-Samad (eternal refuge) cannot be explained in one English word or sentence. Al-Samad means ‘everything depends on Him’. Everything takes refuge with Him. Muhammad Asad renders the verse as: “God the Eternal, the Uncaused Cause of All Being.” [3] This suits very well with the idea of the origin of the universe. There needs to be an uncaused cause!

“He neither begets nor is born,” Again, reiterating that God does not has a cause, and does not need a cause for His existence. Nor does He reproduce. All of that is because…

For the sake of argument, if God needs a cause, then it will be like the ‘infinite regress’ concept I explained just now. But here we exist, therefore an uncaused cause is necessary (also watch: necessary existence).

Why can’t the universe ‘just exists’ like how God just exists?

God, on the other hand, isn’t bound by these rules. His power is absolutely infinite, unlimited. Therefore, it logically follows that His existence does not require a cause.

Although the arguments above do not scientifically prove the existence of God (maybe there’s no way to scientifically prove whether there is or isn’t), they explain why a higher power is the only possibility. And if you think about it, this ‘higher power’ only works if it has the characteristics of God described by the Qur’an. That is why for me, only with the arguments above, it is not enough to conclude there is God. But the way the Quran describes God, and how that description (monotheism, absolute, infinity) matches perfectly with the arguments above, serve as a confirmation that there is indeed God, Allah.

May we constantly be guided by Allah.