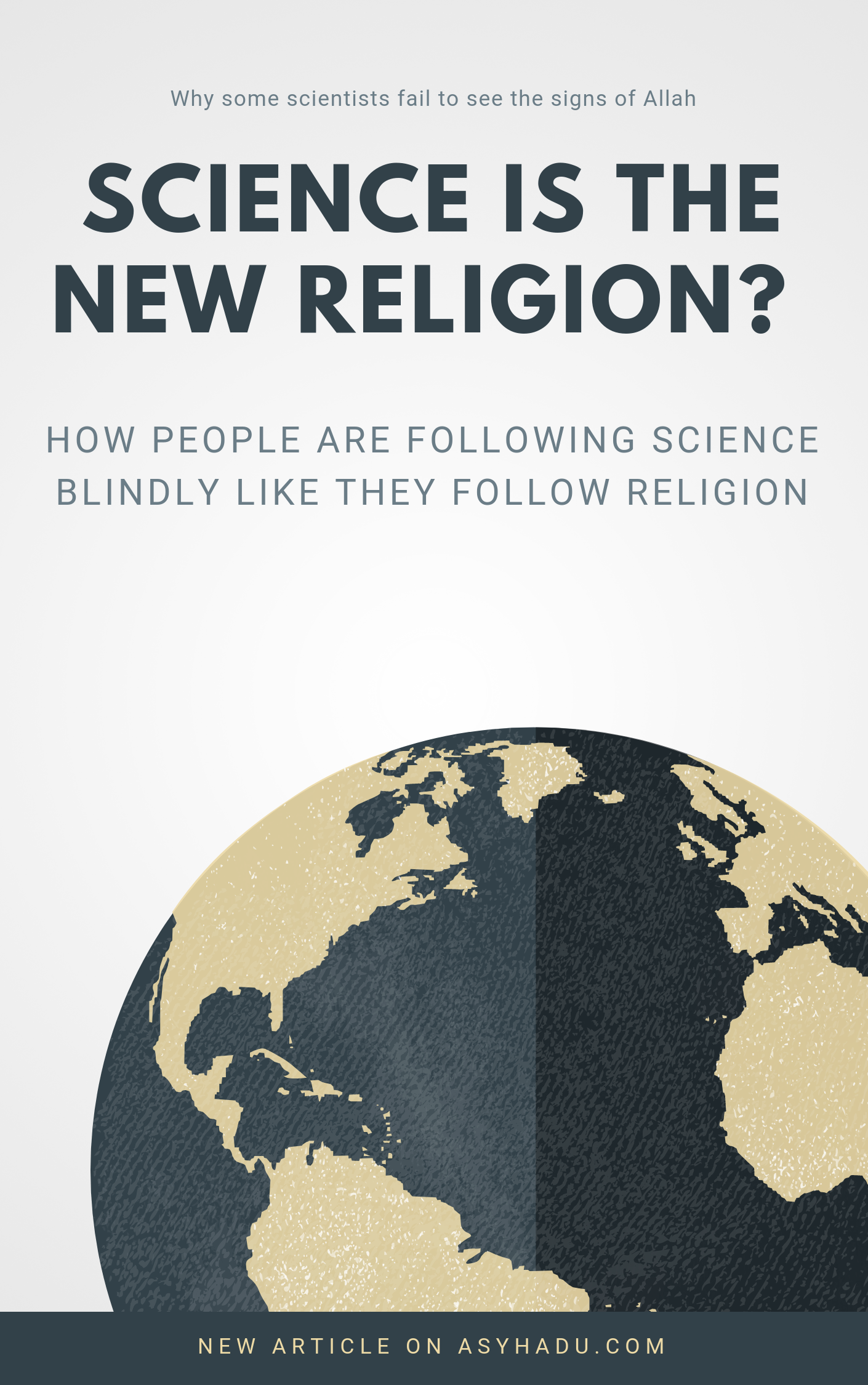 أَفَرَأَيْتَ مَنِ اتَّخَذَ إِلَٰهَهُ هَوَاهُ وَأَضَلَّهُ اللَّهُ عَلَىٰ عِلْمٍ وَخَتَمَ عَلَىٰ سَمْعِهِ وَقَلْبِهِ وَجَعَلَ عَلَىٰ بَصَرِهِ غِشَاوَةً فَمَنْ يَهْدِيهِ مِنْ بَعْدِ اللَّهِ ۚ أَفَلَا تَذَكَّرُونَ
“Have you seen him who takes his low desire as his god, and Allah has made him wrong in having knowledge and has set a seal upon his ear and his heart and put a covering upon his eye. Who can then guide him after Allah? Will you not then be mindful?

Many kinds of theories have been created as an alternative to explain the world “without the need of a god“. Science and religion always seem to incompatible- is it true? They (scientists) have created the big bang theory, Darwin’s theory of evolution, string theory, and many other theories to justify so.

…Which brings me to the question: They are so knowledgable about biology, nature, astrology, ect… but how come they do not see the signs of Allah in them?

These theories, if not confirming the Quran, they suggest that the world cannot exist without a higher power creating the heavens and Earth in the first place.

Their theories support the fact that there must be a presence of The Power in this universe. That is why Islam is not for the weak-minded. It is for them who uses their intellect- as they know Allah has created human beings unique with intellect is not for fun:

Are science and religion compatible? In Islam, of course they are. It is wrong divide science from Islam, as dividing the two is the essence of being secular, which is syirik. Those who learn science should be closer to Allah, not further apart. As an English scientist said it too:

But there are people who are knowledgeable in science but still fail to see Allah in their findings. This is because their hearts have been locked to see the beauty of the Creator’s creations. These people are stubborn and arrogant; and they take their own desires as their gods as in the Quranic verse at the start of this article. These people, although they are intelligent, are blind, deaf, and heartless.

Allah explains that He has not created anything without a reason, and our life on Earth is not just to live and die, those who say otherwise are only assuming:

وَخَلَقَ اللَّهُ السَّمَاوَاتِ وَالْأَرْضَ بِالْحَقِّ وَلِتُجْزَىٰ كُلُّ نَفْسٍ بِمَا كَسَبَتْ وَهُمْ لَا يُظْلَمُونَ
And Allah created the heavens and the earth with truth and that every soul may be rewarded for what it has earned and they shall not be wronged.
أَفَرَأَيْتَ مَنِ اتَّخَذَ إِلَٰهَهُ هَوَاهُ وَأَضَلَّهُ اللَّهُ عَلَىٰ عِلْمٍ وَخَتَمَ عَلَىٰ سَمْعِهِ وَقَلْبِهِ وَجَعَلَ عَلَىٰ بَصَرِهِ غِشَاوَةً فَمَنْ يَهْدِيهِ مِنْ بَعْدِ اللَّهِ ۚ أَفَلَا تَذَكَّرُونَ
“Have you seen him who takes his low desire as his god, and Allah has made him wrong in having knowledge and has set a seal upon his ear and his heart and put a covering upon his eye. Who can then guide him after Allah? Will you not then be mindful?
وَقَالُوا مَا هِيَ إِلَّا حَيَاتُنَا الدُّنْيَا نَمُوتُ وَنَحْيَا وَمَا يُهْلِكُنَا إِلَّا الدَّهْرُ ۚ وَمَا لَهُمْ بِذَٰلِكَ مِنْ عِلْمٍ ۖ إِنْ هُمْ إِلَّا يَظُنُّونَ
And they say, “There is not but our worldly life; we die and live, and nothing destroys us except time.” And they have of that no knowledge; they are only assuming.
(Al-Jaathiyah, 45:22-24)

I want to say that there’s nothing wrong with science but scientists themselves, and those who take scientists as their rabbis and priests. They come up with many theories just to justify the universe is just ‘as is’, without a divine guidance. They draw out the difference between science and religion. The popular notion is that science is opposed to religion because religion is merely a set of beliefs not based by proof. This notion is apparently far form the truth.

It shouldn’t be wrong for me to say that science could be a new religion for those who doesn’t want to even try to see and understand the beauty and complexity of Allah’s creations. To these people, life is just an accident and there’s no real meaning to it. Don’t they see that Allah not only has given humans intellect, but also spirituality- the satisfaction that you get when you are able to link yourself to the highest purpose and enlightened being.

Islam is in fact, better than science and explanation of the universe. It is the mainspring of life, which motivates it and gives meaning to it. Science is only food for the mind, while  Islam is the food for the mind and soul. Science satisfies our physical reality, while Islam satisfies our physical, mental, emotional, and spiritual sense as a whole.