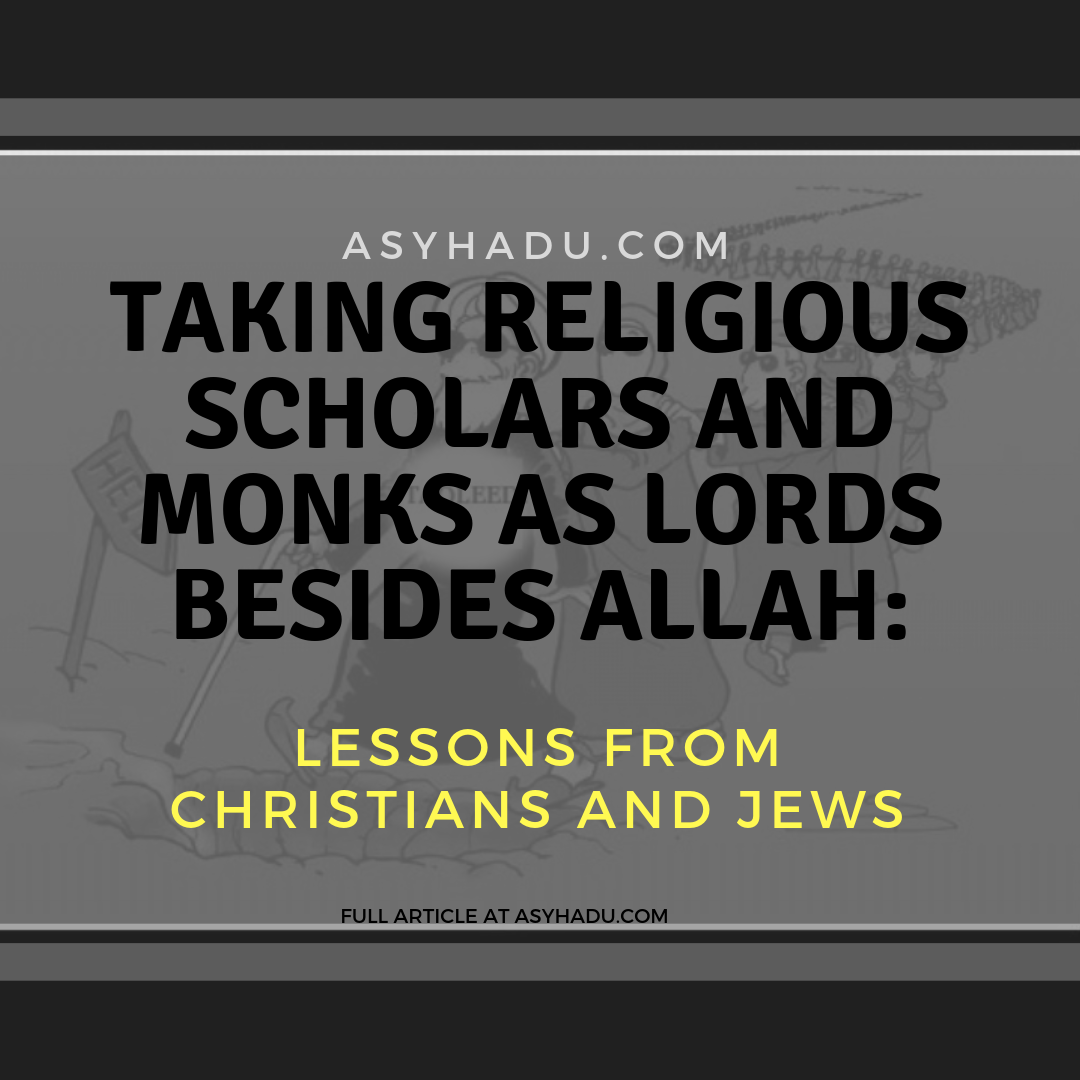 Taking Religious Scholars and Monks as Lords Besides Allah: Learn from the Mistakes of Christians and Jews

اتَّخَذُوا أَحْبَارَهُمْ وَرُهْبَانَهُمْ أَرْبَابًا مِنْ دُونِ اللَّهِ وَالْمَسِيحَ ابْنَ مَرْيَمَ وَمَا أُمِرُوا إِلَّا لِيَعْبُدُوا إِلَٰهًا وَاحِدًا ۖ لَا إِلَٰهَ إِلَّا هُوَ ۚ سُبْحَانَهُ عَمَّا يُشْرِكُونَ
They have taken their scholars and monks as lords besides Allah, and [also] the Messiah, the son of Mary. And they were not commanded except to worship one God; there is no deity except Him. Exalted is He above whatever they associate with Him.
(Surah At-Tawbah, 9:31)

History of Jews and Christians has shown that to deviate the true followers of Allah is simple: Set up a religious organisation (church), with infallible priests, manipulate the scripture, then tell the followers to do things that are against the teaching of the Torah and Gospel. Today, Muslims are following the same path too, if you notice.

Christians and Jews believed whatever said by their rabbis/ scholars/ priests/ monks to be divinely guided even if it doesn’t make any sense to them. Thus, they must follow their rabbis/scholars. Those who do not follow the commands of their rabbis/priests, will enter hell according to them.

That’s the reason why Allah said in the Quranic verse above that “They take their scholars and monks as lords besides Allah…” because they blindly believe everything their rabbis and priests say although contradicting with the Torah and Bible.

As a result most Jews and Christians never read their Torah or Gospel. They don’t know what in the world is written in the Torah and Gospel. They are blind about their own religion.

And what happens when the people don’t know about their religion? Their priests, Pope, rabbis, scholars took advantage over them for worldly gains. They told their followers that in order to achieve forgiveness from their Lord, they must pay money (read: Martin Luther, Reformation), and also the church organisation is known to having a systematic way of raping children, until today.  – all of which are contradicting to the teachings of the Torah and Gospel.

The teachings of Isa (Jesus) a.s. was Islam but then his followers became musyrik-polythiests because their followers take their scholars and monks as lords besides Allah. As a result, their scholars, saints, rabbis, all took advantage on the gullible followers of Jesus (Islam) into followers of paganism (Christianity).

The church was the one who corrupted the teachings of Isa, not Isa himself. It was Paul, a prominent first century Christian saint, who deviated the true Muslims followers of Jesus into becoming the followers of Paul. Isa only preached Islam while Paul corrupted the Gospel and founded Christianity. He blended Persian beliefs into Islam and called it Christianity. Even the doctrine of Trinity, it was only introduced to Christianity 350 years after the death of Isa a.s.!

There are even thinking Christians who themselves are rejecting the paganistic and illogical doctrine of Trinity. Read here.

Also, click on this link to see all the mind-blowing creepy similarities between Christianity and other pagan beliefs: MITHRAS = CHRISTIANITY

The same thing about Jews, they have abandoned the Torah and they only listened to their rabbis and scholars. They are fanatics who only follow what they want to follow in the Book and they don’t follow what they don’t like in the Book. They killed prophets, follow a part of the Torah, ‘worship’ their rabbis and priests. As a result they were cursed by Allah and expelled out of the Holy land.*

Muslims are following the same path, if you notice.

Abu Sa’id al-Khudri reported Allah’s Messenger (ﷺ) as saying:
“You would tread the same path as was trodden by those before you inch by inch and step by step so much so that if they had entered into the hole of the lizard, you would follow them in this also. We said: Allah’s Messenger, do you mean Jews and Christians (by your words)” those before you”? He said: Who else (than those two religious groups)? “

Today, Muslims are forsaking the Quran like the Jews and Christians did to their Torah and Gospel. Muslims do read, but they do not learn from the Quran! They only read the Arabic but they don’t understand a word, which is utterly pointless. Muslims no longer study the Quran as it ought to be studied.

And the Messenger cried out: O my Lord! surely my people have treated this Quran as a forsaken thing.
(Quran, Surah al-Furqan, 25:30)

As a result, the Islam we have today is an ummah of blind faith without knowledge of the Quran. Not only Muslims don’t study the Quran like the Christians and Jews, we were also taught to follow the our own scholars without questioning.

“You cannot criticize the scholars because their knowledge is higher than yours!”
“They have studied the Quran and Sunnah for 20 years and you have no right to question them!”
“Ahli sunnah wal jamaah has the most sound aqeedah, and if you don’t hold on tight you may get astray.”

It’s true that the scholars are more knowledgeable than I am. But why can’t I question? Or give my own opinion? It seems to me like when I take the syahadah I not only have to believe that there’s no god besides Allah and Muhammad is the Messenger of Allah, but I also have to believe that the ahli sunnah wal jamaah are the only correct people in the world and that all sahih hadith are 100% true without a reasonable doubt.

Probably the hardest thing for me to accept what some sunni scholars say is the believe that there are large portions of the Quran that are missing (because they were forgotten or eaten by a goat)! Doesn’t Allah preserve the Quran? Isn’t the Quran suppose to be complete? And because of this, they made laws like stoning to death for married adulterers and killing of apostates (murtad)– both of which has 0% basis from the Quran, but only came from the Hadith.

This leads to very serious questions: How can the Companions memorised the hadith but failed to remember the Quran, the undisputable word of God?

And if hadith are complement to the missing verses of the Quran, then why did the four guided caliphs never made effort to compile ahaadith in written form?

Besides, most Muslim scholars today legalize the so-called Islamic banking although it is clearly based on riba and oppression. Islamic banking actually is just the same as conventional banking. You don’t need a PhD to understand what oppression is, and banks (regardless Islamic or not) are oppressive. Prices of houses soared because of banks. And it oppresses people because they have to pay more than the real amount by paying interests or what Islamic banks call ‘murabaha’.

Only few Muslim scholars including Sheikh Imran Hosein has the guts to declare Islamic banking as ‘riba through the back door’.

Islamic banking is clearly riba, evil and oppressive. Same goes to secular laws. Yet, there are Muslim scholars who legalise these systems for their own interests. The evilness and wickedness of this financial system is explained thoroughly by award-winning economist Zahid in his book “The Foams of the Waves of the Sea”. (If you want a copy of the book kindly contact me in the contacts page or email or dm).

And how could all of this happen? Because Muslims themselves don’t want to study the Quran and they let whatever their scholars say to be true.

For verily, if we continue to let only the ‘religious authority’ to give their opinions while our own views disregarded, we will end up like the Jews and Christians. We Muslims, every one of us must be a student of the Quran to protect the Deen of Islam. If the Companions used to be haafiz (literally means: ‘guardian’) of Quran by memorising them, we also can be haafiz of Quran by ensuring the teachings of the Quran to be upheld. Muslims scholars must be open to criticism and debate with an open mind.

Such a thinking where only the so-called ‘religious authority’ has the right to interpret scriptures sent down by God must be put aside.

I believe everyone has the right to learn the scripture sent down by Him, in fact it is actually necessary too. This kind of system where only the ‘knowledgeable’ can talk about religion only hinders people away from truth.

We think that just because the ulama (Islamic studies scholars) have studied the Quran, we are escaped from the responsibility of studying and pondering over the Quran.

أَفَلَا يَتَدَبَّرُونَ الْقُرْآنَ أَمْ عَلَىٰ قُلُوبٍ أَقْفَالُهَا
Then do they not reflect upon the Qur’an, or are there locks upon [their] hearts?
(Quran, Surah Muhammad, 47:24)

If all Muslims embark on their research of the Quran, I’m sure the Muslim ummah will finally find their strength again to combat evil and uphold justice (Deen) through the Divine Code (Quran). In sya Allah, we will be guided if we hold on to the Quran.

That’s why Allah stressed in the Quran to only follow the Quran, and do not take leaders besides Allah. Because if we do take leaders/guardians besides Allah, we will end up like the Jews and Christians, and Allah will replace with another nation.

Follow what has been revealed to you from your Lord and do not follow guardians besides Him, how little do you mind.
(Quran, Surah al-A’raaf, 7:3)

Return to the Quran, Read & Study!

Should we disrespect our scholars? No. Of course not. Scholars have done a great job. They have went to great lengths to ease our study of the Quran and Sunnah. But we shouldn’t blindly obey them since they are humans inevitable of mistakes. In fact, even the Companions did mistakes. What makes us hold on to the truth is actually the Book of Allah and the Prophet’s path.

May Allah always guide us and give us all hikmah to go on in our lives and to gain the blessings and to be pleased by Allah subhanahu wa ta’ala.

*That doesn’t mean all the Jews are cursed and will never be forgiven by Allah, as in Quran 2:62: “Surely those who believe, and those who are Jews, and the Christians, and the Sabians, whoever believes in Allah and the Last day and does good, they shall have their reward from their Lord, and there is no fear for them, nor shall they grieve.“