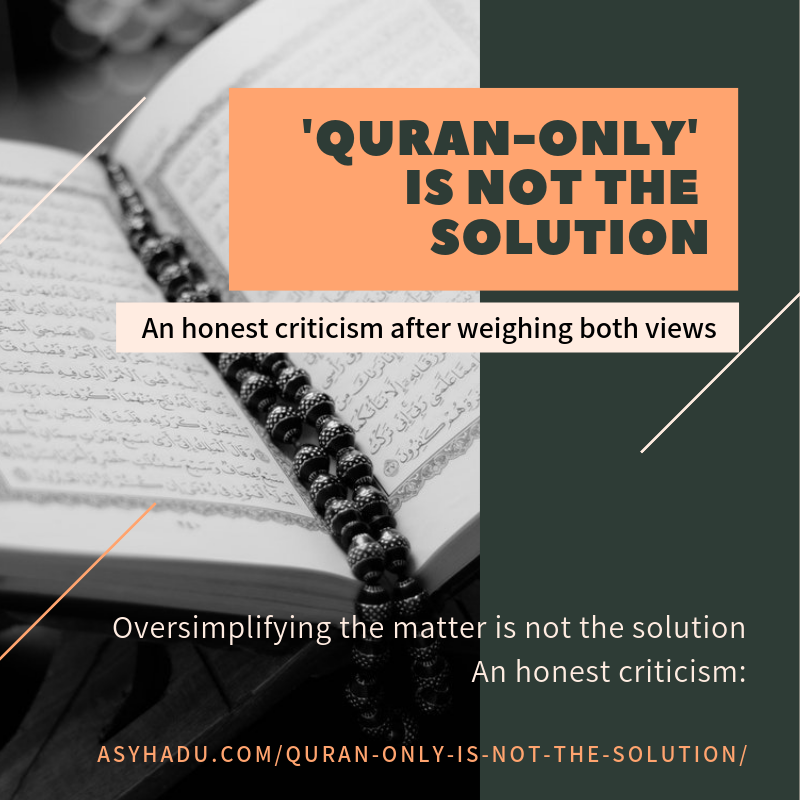 ‘Quran-only’ is not the solution

Published by asyhadu on February 9, 2019

To those who are unfamiliar, the ‘Quran-only’ muslims, or also known as ‘Quranists’, are those who reject the Sunnah and Hadith in all totality. They believe the only way to understand the Quran is only by understanding the Quran, and only the Quran.

Quran-only Muslims do not reject Muhammad’s teachings, they only doubt whether the hadith collection are really words of Prophet Muhammad in the first place. If the Prophet is still alive they would have followed every of the Prophet’s command.

Few months ago, I wrote an article “Quran and Hadith: Which one to follow?” which exposes the flaws and unreliability of the Hadith literature being the word of the Prophet. This is because there are many hadith which contradicts the Quran, contradicts other hadith, and there are even hadith which insults the prophet. I called for the re-examination on the way of looking at hadith. In doing so, I stated one of the most important principle is referring to the Quran first and foremost, before looking at any other source.

Hadithers blindly accept all ‘sahih’-graded hadith in the six canonical hadith books (Bukhari, Muslim, Nasa’i, Abu Daud, Tirmidhi, Ibn Majah) without examination. They think just because it is graded ‘sahih’ (by mere humans) it is therefore undoubtedly the word of the Prophet. This is a very ignorant approach. Those who really study the science and history of the compilation of hadith understand that ‘sahih’ does not necessarily mean it is certainly from the mouth of the Prophet.

On the other side of the extreme, there are those who only follow the Quran and reject totally the hadith. Although I would say that the Quranists are closer to the spirit of the Quran, there are still things lacking in their approach. By rejecting hadith in all totality, one will miss out on many precious insights and lessons. The solution is not to accept hadith and abandon Quran, nor accepting Quran and reject all hadith. I believe the best approach is somewhere in between.

In this article, I’ll be explaining why the ‘Quran-only’ approach is not a complete solution to the problem.

Recommended reading: Quran and Hadith: Which One To Follow?

There’s a reason why the Messenger was a man, not an angel, nor did the book came without a messenger

Think about it, if Allah wanted us to follow the Quran only, then why won’t He just use an angel as a messenger, or just send down the book ‘like that’? If He would sent down an angel instead of a man, the prophetic mission would be easier right? Even Pharaoh asked why has not there been angel came to him:

(Pharaoh said): But why have not bracelets of gold been put upon him (Moses), or why have there not come with him angels as companions?
(Quran, Al-Zukhruf, 43:53)

The reason is simple, because if the Messenger is a man it would be easier for humans to sympathize with the Messenger, relate with his human nature, follow him, and to emulate the way of life of the Messenger. If it had been an angel, the angel does not sleep nor does he eat, and his mission to establish Islam would be way too easy. In the end, Muslims will not be able to watch and learn how the Messenger established Islam because they cannot relate to the angel.

It’s amazing that Allah had chosen a man that we not only can feel our affection and care for him, but also take him as an example.

Allah also did not send down the book without a messenger. The opposite should be the case if Allah doesn’t want us to follow the steps of a messenger and use the Quran-only approach.

Muhammad was the living Quran

If you want to find the only man who has ever implemented the Quran 100% in his life, it would be Muhammad. Without Muhammad as the Messenger of the Quran, there would be no exemplar or role model of a Quranic person.  It would thus be hard for humans to appreciate the life and manhaj (way/method) wanted by the Quran.

“Indeed in the Messenger of Allah you have a good example to follow for him who hopes in Almighty Allah and the last day and remember Allah much.”
(Quran, Al-Ahzab, 33:21)

For example, there are commands in the Quran to fight the disbelievers, but how, when, and why? Those are explained in detail by the Prophet. The Prophet only made war with disbelievers after hijrah, not before. This means the a condition of war is the existence of a state. Quran-only Muslims will understand differently by making war before the creation of an Islamic state. Their method does not follow the footsteps of the Prophet, and their method will inevitably fail. They are instead likened to the terrorists of ISIS who wage war without the correct procedure.

“The Quran is similar to a constitution and the Hadith assists one in interpreting the Quran and putting it into practice.” -Syeikh Yusuf al-Qaradawi

Some would then argue, if Muhammad was the living, breathing Quran, then why are there hadith which contradicts with the Quran? As I said, not all hadith (even sahih-graded) are really the words of the Prophet. Proper scrutiny must be carried out. One has to understand that the role of hadith is merely to assist us in interpreting the Quran as stated in Quran 16:44 [1]. The hadith must be in logical consistency with the Quran. If otherwise, then the hadith is flawed, and may be ignored. ‘Logical consistency’ here means- imagine the Quran as a puzzle, and the hadith as a piece of the puzzle. If it fits, then it can be used.

The Quran as a book, and Muhammad as the teacher

For layman Muslims to get guidance is already sufficient with the Quran. However, to further appreciate and ‘unlock’ the ‘treasures’ from the Quran one has to also understand beyond the surface meaning of the Quran by understanding its context. And this is where the hadith comes in handy.

Often people misunderstand a text. The Quran is certainly a complete book which explain all things. But even a book that explains all things require a teacher for you to
1) completely understand the context and understand from the perspective of the author
2) to convert teachings into actions

Imagine you’re trying to learn about science only from a science textbook. Would you be able to understand science by only understanding the textbook? If you’re super smart, maybe. But even if that’s the case, without the teacher you will not be able to really appreciate science and not be able to really know how to apply what you learn in real life. This is because the teacher can give very useful insights and can help you to determine what choice you make. Teachers also demonstrate practically how you can apply what you’re reading.

Same goes to our Messenger Muhammad pbuh. It would be an insult to say that he’s nothing but a post man. He is the one who gave us useful insights of the Quran (ta’wil of the stories in Quran), he helped us determine our choices (from his judicial precedents) and most importantly, he demonstrated the 100% guaranteed way to finally bring the most wicked ill-society into the most pristine and ideal society. And NO MAN, not even a Muslim has ever been able to beat his track record.

With clear arguments and scriptures; and We have revealed to you the Reminder that you may make explain to men what has been revealed to them, and that haply they may reflect.

According to Michael H. Hart’s “The 100: A Ranking of the Most Influential Persons In History” noted Muhammad pbuh as the #1 most influential person. And are we just suppose to disregard his life and history and not learn from him?

They’re only making assumption of how ‘Quran in action’ is.

Let me give you an example. The Quran teaches to uphold the Deen of Islam- making Islam the way of life in every part of our lives- politics, economy, social, etc. The solution IS in the Quran (don’t get me wrong), but it’s jumbled up in the Quran, and even if you’ve found it, you wouldn’t be able to appreciate and truly ‘see’ how the Quran should be in action. In the end they’re only making assumption of how ‘Quran in action’ is. If you ask a Quran-only Muslim about how to uphold the deen of Islam, they won’t be able to answer, because rejecting the Sunnah means also rejecting the Sirah (history & biography) of the prophet. In fact, they shouldn’t even follow the arrangement of the chapters in the Quran, because that was arranged by the Prophet too. And they shouldn’t even follow the reading (qiraah) of the Quran!

In a nutshell, Quran-only Muslims are deprived of the practical teachings of the Quran and they are only making assumptions on how ‘Quran in action’ is. They are also missing out on the social and language context of the Quran.

A balanced approach must be taken when dealing with the hadith literature. By that, I mean we shouldn’t simply accept a hadith just because it is graded ‘sahih’ by a human, and we shouldn’t on the other hand oversimplify the matter by throwing away all the hadith records. Sure, there are forged hadith even in the sahih collections of Bukhari and Muslim (even the Muslim scholars have pointed this out [1] ) but to throw away all of them would make the Muslims miss out on the practical side of the Quran and the precious insights and teachings in the Sunnah. Quran-only Muslims have simply disregard academia by rejecting all the vehemently hard works of traditional scholars, which is really ungrateful, really.

Therefore, strict rules of testing hadith must be carried out first. Those who love to quote ahaadith tend to forget that the science of hadith are composed of both the criticism of the chain of narrators and also criticism of the text itself. There are many rules and principles before accepting a hadith. The simplest rule of thumb when dealing with hadith is that it should have as strong sanad (chain of narrators) and in logical consistency with the Quran. The hadith must be supported by many other hadith. It also must reflect Muhammad as a Prophet. [2]

Recommended reading:
Quran and Hadith: Which One To Follow?
Prima Quran