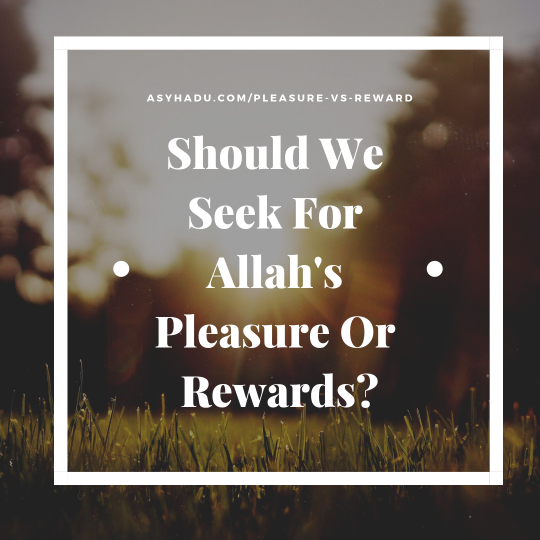 Should We Seek For Allah’s Pleasure Or Rewards?

Does Allah wants us to seek His Pleasure or His Rewards? The word ‘pleasure‘ in Quran is ‘ridhwan‘ and ‘mardhatillah‘. They come from the trilateral root ر-ض-و. It is synonymous with ‘approval’, ‘acceptance’ and ‘agreement’ in Quran translations. ‘Reward‘ on the other hand in translated from ‘ajr‘, ‘thawab‘, ‘jaza‘. Only ‘ajr‘ is usually used for good reward from Allah, which is paradise. While ‘thawab‘ and ‘jaza‘ are used for both good and bad rewards, and can be from either God or man. In the Malay society (since most of my readers are Malays) ‘reward’ is usually associated with Sanskrit word ‘pahala‘, since the Malays had some Hindu influence before the advent of Islam into the Peninsula.

But does Allah actually wants us to seek his ajr/thawab/pahala (rewards) or to seek His pleasure (ridhwan/ mardhatillah)? From the Quran, we can understand that we should EXPECT for both, because seeking the pleasure of Allah means hoping for the rewards from Allah.

Verses about seeking pleasure of Allah:

Verses about expecting the rewards of Allah:

وَمَا أَسْأَلُكُمْ عَلَيْهِ مِنْ أَجْرٍ ۖ إِنْ أَجْرِيَ إِلَّا عَلَىٰ رَبِّ الْعَالَمِينَ
And I do not ask you for it any payment. My payment is only from the Lord of the worlds.

الَّذِينَ يُنْفِقُونَ أَمْوَالَهُمْ فِي سَبِيلِ اللَّهِ ثُمَّ لَا يُتْبِعُونَ مَا أَنْفَقُوا مَنًّا وَلَا أَذًى ۙ لَهُمْ أَجْرُهُمْ عِنْدَ رَبِّهِمْ وَلَا خَوْفٌ عَلَيْهِمْ وَلَا هُمْ يَحْزَنُونَ
(As for) those who spend their property in the way of Allah, then do not follow up what they have spent with reproach or injury, they shall have their reward from their Lord, and they shall have no fear nor shall they grieve.

Yes, we should be hoping for Allah’s pleasure and His rewards, which is paradise. However, I found an interesting link between REWARD and PLEASURE; what we should actually be SEEKING is His pleasure, then only Allah will give His reward:

مَا كَتَبْنَاهَا عَلَيْهِمْ إِلَّا ابْتِغَاءَ رِضْوَانِ اللَّهِ فَمَا رَعَوْهَا حَقَّ رِعَايَتِهَا ۖ فَآتَيْنَا الَّذِينَ آمَنُوا مِنْهُمْ أَجْرَهُمْ ۖ وَكَثِيرٌ مِنْهُمْ فَاسِقُونَ
…We ordained it not for them – only seeking Allah’s pleasure, and they observed it not with right observance. So We give those of them who believe their reward, but many of them are evil-livers.

And this makes so much sense if you think about it! When you’re working, should you think about the quality of the job you’ve done first, or should you be thinking about the salary you’ll get after the job? Often, those who only think about their salary when working, their results are bad and they will never get promoted. If you’re studying, should you only focus on the grades you want or should you be focusing on the quality of your studies? Often, those who only want good grades don’t really understand what they’ve learnt and willing to cheat.

As a Muslim, should we only seek rewards of Allah or should we be seeking His pleasure? There’s no doubt that His reward can be a motivation for us all- but what should be kept in mind is that our aim is to get His pleasure. The reward is later. Besides, Allah clearly said that His pleasure is greater than His reward:

However, today Muslims are taught to rush for Allah’s reward instead teaching them to seek His pleasure. Is that right, since Allah told us to seek His pleasure first? We are always taught about what kind of deeds have the highest ‘rewards’ but we are rarely taught about what deeds we should do to get the pleasure of Allah. This kind of teaching endangers the Muslim ummah by making them think that our purpose of life is to seek rewards when we should be seeking Allah’s pleasure.

As a result, we have such ‘Muslims’ who would neglect other responsibilities to go after ‘deeds with higher rewards’. For example, some Muslims don’t want to help their family and friends at Ramadhan nights because they think tarawih is better than taking care of their relationship with the others (silaturahim). Some Muslims read the Arabic Quran cover-to-cover without understanding the meaning (what’s the point of reading then, isn’t the Quran a lesson for all humanity?). Some Muslims see the evil that’s going on around them but never made effort to stop it although he knows amar ma’ruf wa nahy munkar is an important teaching in Islam.

We have to change this way of thinking- what we should seek from Allah is His pleasure (ridhwan/ mardhatillah), not just ‘reward’ (thawab/ajr). Islam is more than just collecting ‘points’ to enter jannah. Islam wants the quality of our deeds, not the quantity of our deeds. Islam is not just about avoiding evil, it is also about fighting evil. It is also not only about doing good, but also establishing a just divine system of life (politics, economy, social). It’s about giving your all trying to get the pleasure of Allah.