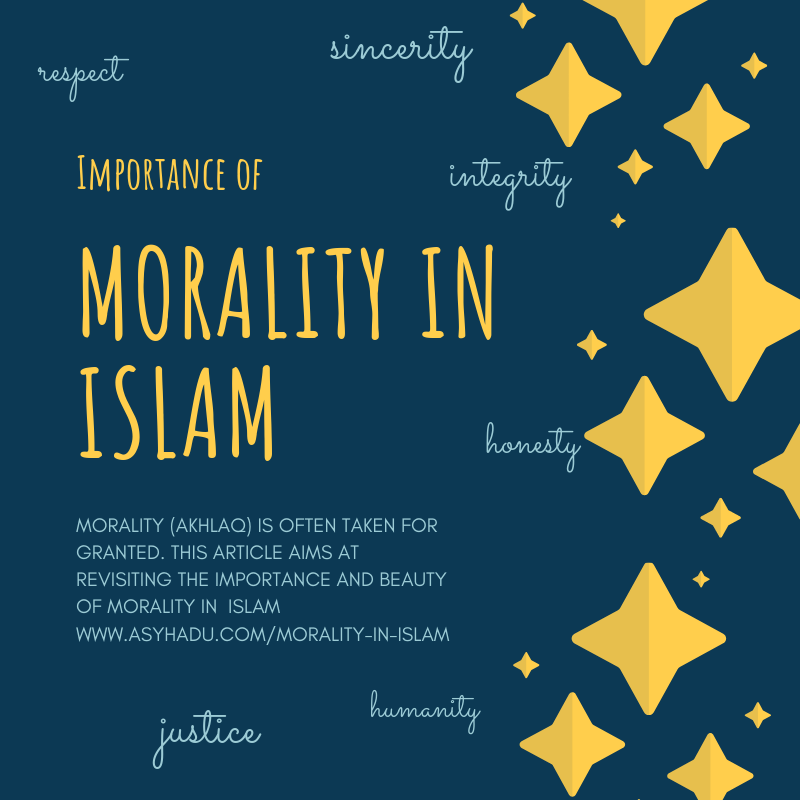 بسم الله الرحمن الرحيم
With the ‘ism’ of Allah, the Most Gracious, the Most Merciful

Morality. It really does sound simple yet humans constantly overlook.

The truth is, every big mission, every daring goal, every ambitious success is preceded with morality. Even in ‘prophetic’ missions morality play a huge part.

Morality in Islam is termed as ‘akhlaq‘. It stemmed from the root ‘khalq‘, meaning ‘creation’. Therefore, if we have akhlaq in our lives, we have served the purpose of the creation- khalq.

Why is morality in Islam important?

Morality is an indispensable part of Sharia and Islam

Islamic law or ‘Sharia’ is the whole total set of rulings in Islam. According to Mohammad Akram Laldin [1], uniquely, the Sharia not only comprises of actionable rules (al-ahkam al-amaliyyah) like punishments, prayers, jihad, charity. The Sharia is also comprised of rulings on belief (al-ahkam al-i’tiqaadiyyah) and rulings on moral (al-ahkam al-akhlaqiyyah).

As we can see, Islam focuses not only on the outer aspect of life (actions), but also our inside (belief and moral).

The fact that morality is part of Islam can be proven by deductions from Quranic verses themselves:

Example of verses about morality:

We can see how Islamic law is more comprehensive than civil law which only focuses on punishments and duties but leave out the inner part of ourselves.

How morality plays a role in the sunnah/manhaj

The whole mission of the Messenger and the believers of his time was to establish deen (Islamic system of life), as Allah commanded in 42:13 in the Quran. In other words- to implement the Sharia.

If we study the sunnah, did Muhammad try to straight away implement the whole code of the Quran at once- that the thieves’ hands must be cut, the fornicators must be flogged, riba must be banned? No. He did not, it was impossible to do so. There has got to be a clear procedure (manhaj) before implenting Islamic laws completely. Therefore, Muhammad pbuh taught his people about iman (belief) at first.

Iman is very important because it serves the bedrock of the deen. Muhammad pbuh cleansed the idol-worshippers from syirk and made them return to the one true God. He taught about following nothing but the book of Allah. He taught them the right framework of belief in Islam.

Only after having a strong foundation of iman, one can be expected to follow the commandments of Allah. He could have be carrying out his individual responsibilities already, but his social responsibilities aren’t possible yet, since the believers are not yet united. This is where akhlaq – morality in Islam, comes into great importance.

Morality improves the relationship between human and God, man and man, woman and woman, man and woman, believers and believers, and even believers and non-believers. Obviously, this is important to establish the strength of the Muslim ummah. Without morality, we would be fighting and insulting each other and Muhammad’s mission will never be completed.

Only then, after having strong foundation of faith and strength as a community, the Muslim ummah can embark further on their mission to establish deen. Hence, they carried out their hijrah to Medina, and struggled (jihad) to fully implement the Sharia. That is when the whole actionable rulings are implemented.

We can conclude it as: iman-> akhlaq-> jihad-> fath (victory)

How can people even trust each other, or even live together if morality in Islam is not applied? Just look at our everyday lives today, do we even look at each other’s faces when shaking hands after salaah?

Do we practice fairness when doing transactions?

Why do we condemn each other’s skin colour, passion, and opinion?

Today, many people love to bash each other just because their opinions are different from the majority view.

Those who have different views on Islam are straight away labelled as ‘kaafir’ and ‘zindiq’.

We say that those who claim the Earth is flat have lost their mind without even considering their point of view.

The real application of Islam doesn’t start from the rigorousness of our daily worship rituals, nor from the number of salah prayers, or number of days we fast, or how many Islamic scholarly books we read.

Instead, it branches off from the inner self. And what shapes the inner self? Imaan (faith) and akhlaq (morality). If our imaan and akhlaq is good, then our actions and thoughts automatically be good too.

This is evidented from the Quran itself, where Allah equated a good kalimah (word/principle) to a strong tree which gives benefit to others:

It is further strengthened by a report attributed to Muhammad pbuh, narrated by Al-Nu’man bin Bashir:

We need to remind ourselves that we are like trees, when the heart is good, then our whole outer actions will be good. When the heart is deeply rooted in iman and akhlaq, our amal will be cleansed from syirk.