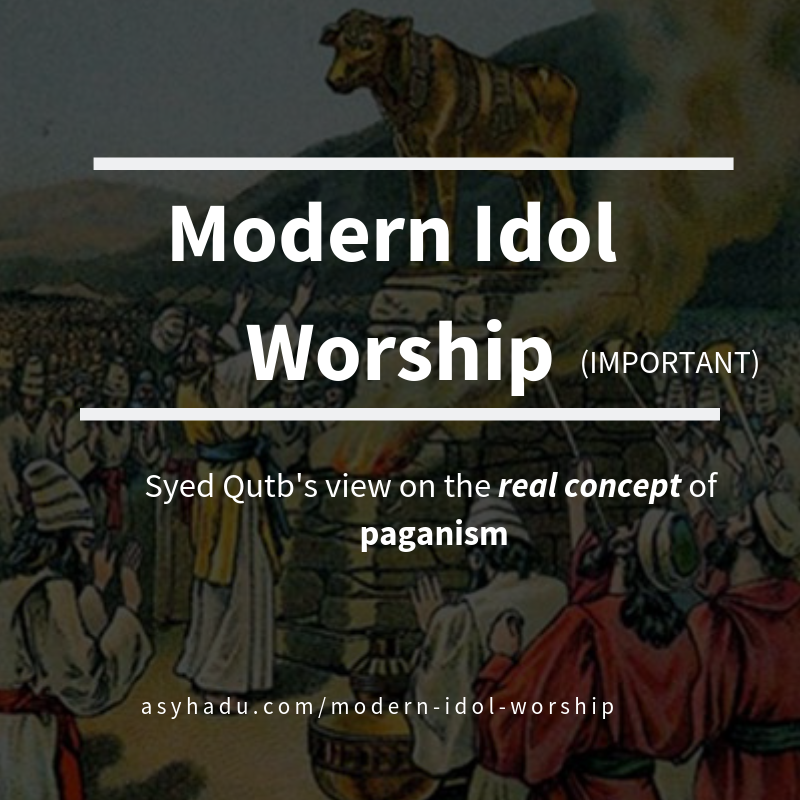 The need to identify and re-examine the real meaning and nature or ‘syirk’, or in other words idolatry/polytheism/paganism, has become of growing importance today. People today are, in essence, practicing idol worship without even realizing it. Why do I say that?

What does it mean by idol worship? Does it only mean the worship of stones and statues, like how the ancient societies used to do? What is it actually the concept of idol worship?

In the Quran, the word for idol worshipers is ‘musyrikuun’. It comes from the word ‘asyaraka’ which means ‘to associate’ or ‘to make something a partner with something else’. And from that word comes other Arabic words like ‘syarikah’ (company= partnership between businessmen).

Syirk doesn’t necessarily mean not worshiping Allah, it simply means worshiping more than one god. The Makkan polytheists of Muhammad’s time acknowledged Allah as Lord. But they continue to indulge in their idol worship because they found their forefathers practicing it. hence, they committed syirk.

Syed Qutb has explained the nature of ‘idolatry’ in his Quran commentary ‘Fi zilali al-Quran’ on the final verse of surah Ibrahim. And I couldn’t have said it better than he did. It’s quite long, but please pay attention to what he said:

“The worship of idols which Abraham prayed to God to spare him and his offspring from does not take only the primitive way which the pagan Arabs and other communities practised. It is not merely the worship of deities made of stones, trees, animals, birds, stars, fire or spirits. To limit the concept of polytheism to this primitive form blurs our view so that we cannot see other forms which may bedevil humanity in different states of jāhiliyyah. We need to have a fuller understanding of the nature of associating partners with God, its relevance to idols, and the nature of idols and how they are represented in modern states of ignorance, or jāhiliyyah.

Associating partners with God may take any form and be represented in any situation where submission in all aspects of life is not to God alone. It is sufficient that a person should submit to beings other than God in certain aspects of his life to be in a situation of associating partners with God, even though he submits to God alone in the other aspects of his life. Worship is only one aspect of life where submission is reflected. But there are many other forms of submission in human life which give us practical examples of polytheism.

A person may believe that Godhead belongs completely to God alone, and he submits to Him in his prayers, fasting, performing pilgrimage and other aspects of worship, but he may at the same time submit to laws other than God’s in his social, economic and political life. He may also submit to concepts other than those approved by God in his social standards and to other human beings in his moral values, traditions, customs and style of dress. Such a person practises polytheism in its essence, in full breach of the meaning of the declaration that “there is no deity other than God and Muĥammad is God’s Messenger”. This is what people overlook. They take all such matters carelessly, without thinking that they demonstrate the same paganism that has been practised by different communities throughout history.

“It is not necessary that idols be represented in primitive form. For idols are mere covers for tyranny which hides behind them in order to impose its authority over people.”

It is not necessary that idols be represented in primitive form. For idols are mere covers for tyranny which hides behind them in order to impose its authority over people. Yet none of these idols speak, hear or see. Its custodian or priest or the ruler was always around, chanting the idol’s praises or acting as its spokesman, but saying what he wants to say. Therefore, when banners or slogans are raised in any community which give rulers or priests the power to put in place laws, values, standards and practices that are at variance with what is acceptable to God, then these are in effect, position and nature deities like those idols of old.

We see today that nationalism, patriotism or a certain class in society or people as a whole are made like banners or slogans which are adored in place of God. People are made to sacrifice for such banners their lives, property, morals and even their honour. Whenever divine law and its requirements come in conflict with what the service of such banners and slogans requires, then God’s law is set aside and the requirements of these banners are met. To be more accurate we should say that it is the requirements of the tyrants standing behind these banners that are fulfilled. This is indeed a form of idol worship, because an idol need not be made of wood or stone. It can be represented in a doctrine or a slogan.

The role of Islam is not only to destroy wood or stone idols. That was not the purpose of all the efforts and sacrifices made by God’s messengers and their followers in history. Islam aims rather to establish in a very clear way the difference between submission to God alone in all matters and affairs and submission to other beings or entities. It is necessary to look carefully at forms and appearances in every situation to establish whether the existing order conforms to the concept of God’s oneness or to a form of paganism.

People may imagine themselves to be following the faith revealed by God because they declare, “There is no deity except God, and Muĥammad is God’s Messenger”, and they submit to God in all matters of worship and in marriage, divorce and inheritance. Yet when matters go beyond this narrow aspect, their submission is to other beings. They follow laws that are in clear conflict with what God has legislated. They even sacrifice their lives, property, honour and morals, willingly or unwillingly, to fulfil what this neo-paganism requires of them, even when it is in conflict with what is acceptable to God. They are thus totally mistaken when they imagine that they follow Islam. They should wake up and realize that theirs is a situation of clear paganism.”

If this passage does not give you a slap in the face, I don’t know what will. Paganism, in all its essence, is what the people in the whole world are doing today. Idol worship is anything that gives a sense of direction other than to God. Even in Malay, ‘berhala’ has the word ‘hala’ (direction), which literally means ‘having a direction’ (other than to God).

Do we want ourselves continued to be in the abyss of darkness and syirk? It’s time that we reflect to ourselves. What are we actually worshipping? The simplest way to answer that is: For whom would I spend my whole life for? And for whom shall I die for?

For those who are still figuring out who their real god is, fear Allah. Indeed Allah loves those who seek for repentance. And for those who have cleansed their soul from this disease of syirk, how do we put an end to this global endemic?