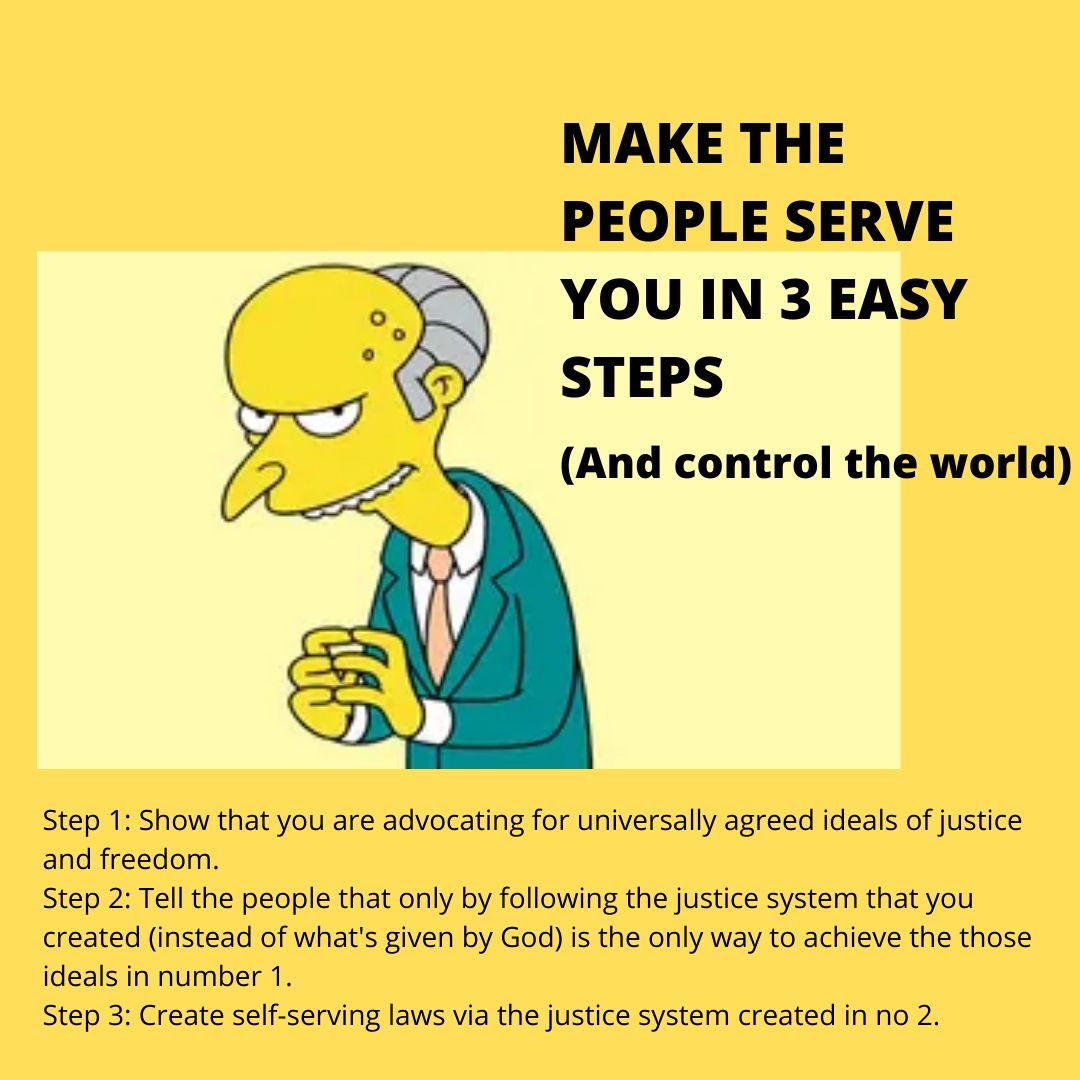 “And they conspired an immense conspiracy. And said, ‘Never leave your gods and never leave Wadd or Suwa’ or Yaghuth and Ya’uq and Nasr.” (Quran 71:22-23)

How did the rulers and leaders made the masses submit to them? How were they able to create a religion where they themselves are gods?

Step 1: Show that you are advocating for universally agreed ideals of justice and freedom.
Step 2: Tell the people that only by following the justice system that you created (instead of what’s given by God) is the only way to achieve the those ideals in number 1.
Step 3: Create self-serving laws via the justice system created in no 2.

This is what you call the hijack of religion. Or, more precisely, the hijack of a universally agreed upon idea of justice. Yes, basically what I am saying is that any justice system is a religion. And people hijack systems of justice like they hijacked religions in the past.

How did the rulers and leaders controlled the masses? The Quran explained:

“they conspired an immense conspiracy. And said, ‘Never leave your gods and never leave Wadd or Suwa’ or Yaghuth and Ya’uq and Nasr.” (Quran 71:22-23).

The five names mentioned in the verse were previously righteous persons who were loved and celebrated by the people . When these persons died, the rulers and leaders of those times saw a good opportunity to control the people and told the people to worship these persons so that ‘they were granted rain by their worship of them.’  (Step 1&2)

The people of that time lacked the understanding of nature. They were superstitious and thought that worshiping the past righteous people could bring blessings. It was easy for the chiefs of those times to fool them. This made the chiefs as the ‘representative’ of the new-founded religion, where the people thought that these representatives knows about the religion. Slowly they began to make statues of the 5 righteous predecessors and worshiped them. The chiefs used the religion to make laws that served in their favor and oppressed the poor majority. (Step 3)

Little do people know the same boring technique is employed, during the reign of Pharaoh, during the pre-feudalistic reign of the chiefs of Mecca at Muhammad’s (saws) time, AND today too! The only difference was between now and then was that, in today’s time, religions are created ‘rationally’ rather than superstitiously back then. For example, secularism, atheism, scientism, communism, capitalism, nationalism, hedonism are all important components of their worldview that it would be fair enough to call them religions, as these ideologies shaped their way of life. But the technique is same in essence.

No one disputes that progress can bring peace. Technology, wealth, and freedom, are all the universally agreed upon values that shapes morality. The American Dream- to have freedom, to have financial happiness are what every human wants irrespective of religion or political inclinations. (Step 1)

Besides, the political leaders and corporate giants of America also saw the opportunity to make these universally-agreed values as a way to indoctrinate and legalize monopoly. Capitalism was championed by them. The doctrine is “anything that makes money makes success” , “only with money can buy happiness”, and ” if you hate communism, then support the capitalist West (when they should be supporting economic equality given by God).” This way the corporate giants in America funded the political parties which are in their favor, and the politicians keep on advocating and indoctrinating capitalism.

The technique can be summarized in three easy steps (again):
1. Show that you are advocating for universally agreed ideals of justice and freedom.
2. Tell the people that only by following the justice system that you created (instead of what’s given by God) is the only way to achieve the those ideals in number 1.
3. Create self-serving laws via the justice system created in no 2.

What blinded the people

Basically, it is the ignorance about a better system (deen) which is ordained by the One True God (i despised using ‘better system’ instead of ‘the right system’, but for the sake of communication). This is what Nuh fought for. This is what the Hud, Salleh, Shuayb, Ibrahim (Abraham), Musa (Moses), Isa (Jesus), and Muhammad all fought for. They were spreading awareness that success is not measured by money you make, by the size of your car, or by the number of your children. It is not measured by how you can turn people into poverty through the oppressive system of capitalism.

People believed in success, and they want to achieve that. The problem is, people do not know what success is, and they ended up chasing the ‘success’ as defined by those rulers and leaders of their respective communities. False ideas of success= false gods. For the believers of God, the men of God who live and eat through honest means, believe that success cannot be simply defined by anyone, especially not those who are hungry for wealth and power. Success, justice, and order can only be defined by the Creator of the Universe, because only the Creator knows better about His creations.

The social mission by the prophets Nuh, Hud, Salleh, Shuayb, Ibrahim, Musa, Isa, Muhammad, was first to proclaim the truth:- which is to worship the One God and to shun all other gods including past predecessors, money, ego, etc. Second, to fight oppression and injustice. They did this by showing the incoherence in the people’s thinking, hence the often repeated phrases in the Quran: afala ta’qilun (why do you not use reason?), afala tafakkarun (why do you not think?). The chiefs and capitalists will be mad when we re-think about the current system therefore the third part of the social mission is to establish a just social order based on the values ordained by God.

Learning the techniques of how people hijacked universally-agreed ideals of justice and freedom deepens our appreciation to God, and strengthens our dependence on the One God who is the source of Truth. “Blessed is He who sent down the Criterion upon His Servant that he may be to the worlds a warner”, for without the Criterion (Quran) we would never be guided to the right definition of success, constantly whirling in confusion and fooled by the oppressive capitalist regime. Therefore, we need to understand that it is the One God we worship. And from Him we ask for help. We need to put God as the center of our lives. In every of our actions and thoughts, we ask for inspiration from the One God. This is the essence of Tawheed.