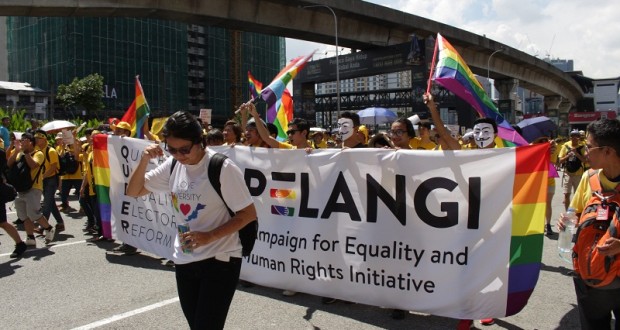 LGBT & Extreme Feminism- Why do they exist?

Just who doesn’t know about the ongoing issue on gay rights that people are fighting about? Today, we can even see straight people are supporting gay rights and LGBT movements.

Yes, we all know that but the question is: How do these organisations existed in the first place, and how did they got so strong?

Influential activists- like Siti Kasim and Marina Mahathir, are among the famous people who support gay rights and the LGBT group. There’s also Maryam Lee, one of the “women rights” leaders in Malaysia. Why are they trying so hard to fight? Why are these people so angry? And how do these people gained so many followers and grew very strong?

Think about it. Well..

The exponential strength of these activist groups points out that  the problem is actually within society itself.

The fact that people love to judge and punish (read: menghukum) even before these ill-fated groups did anything, doesn’t necessarily show that gay people are the problem, but it clearly shows that the disease is actually in the “normal” people in the society.

Someone can be gay because of a few reasons. Sometimes it is because about their horrible past, sometimes it’s about the absence of the mother or father figure, sometimes, the reasons are not known- we must first understand that not all gays chose to be gay.

But what happens today is that, when someone confessed he is gay or lesbian, firstly, their friends will laugh and make fun of him. Secondly, their family will distance from them. Thirdly, comes the annoying ustaz who will preach “Noooo it’s haraamm… Look what happened to the people of Lot bla bla bla. you want that to happen to you? you want to enter hell?” when everybody clearly knows that being gay is wrong- It only gets more annoying and frustrating.

Do you see what’s happening? What happens when these people got emotional, sad, and angry?

Then someone comes to this person, “Hey, I understand what you’re going through, I have the same problem as you”. The gay person says “Really, you  do?” And the other person “Yeah why don’t you join me, and we create a solidarity group to revolt”

Once they’re in the group, it is very hard to turn back. They have been indoctrinated it’s okay to be gay, gay is pride, equality for all. That’s how the war started between the LGBT movement and the normal but stupid people of the society.

This is similar to Maryam Lee’ s case, who was kicked out of the mosque because she wasn’t wearing her hijab. And she has been condemned over and over again by netizens from then on, just because of one photo, one issue. It’s not a big wonder how and why she decided to be a so-called feminist activist.

Maryam Lee in an interview with Iki Putra,

“The disappointment is in how we are so unforgiving to women”

“Sure, I get it you’re (the society) trying yo punish me but, why, are you punishing me so much, like so so much, like, did I killed your cat?”

The fact that she gained a lot of followers and supporters, again, exposes that many other women are facing the same problem as her.

The existence  of LGBT and women’s rights activism is very unique- it shows that the problem is the society itself. It is a symptom of the disease of the society. And the existence of these groups show that not only one or two people are facing this, but very many people nationwide. It’ terrible! But we should, actually embrace this fact, because only by knowing our weaknesses, we can improve.

فَبِمَا رَحْمَةٍ مِنَ اللَّهِ لِنْتَ لَهُمْ ۖ وَلَوْ كُنْتَ فَظًّا غَلِيظَ الْقَلْبِ لَانْفَضُّوا مِنْ حَوْلِكَ ۖ فَاعْفُ عَنْهُمْ وَاسْتَغْفِرْ لَهُمْ وَشَاوِرْهُمْ فِي الْأَمْرِ ۖ فَإِذَا عَزَمْتَ فَتَوَكَّلْ عَلَى اللَّهِ ۚ إِنَّ اللَّهَ يُحِبُّ الْمُتَوَكِّلِينَ
Thus it is due to mercy from Allah that you deal with them gently, and had you been rough, hard hearted, they would certainly have dispersed from around you; pardon them therefore and ask pardon for them, and take counsel with them in the affair; so when you have decided, then place your trust in Allah; surely Allah loves those who trust.
(Quran, Al-Nisa, 4:144)

Remember, feminists and gay rights activists base their crusade on their feelings and emotions. If we can shift their emotions to side on us, then chances are we may get them back to the right path.

يَا أَيُّهَا الَّذِينَ آمَنُوا لَا يَسْخَرْ قَوْمٌ مِنْ قَوْمٍ عَسَىٰ أَنْ يَكُونُوا خَيْرًا مِنْهُمْ وَلَا نِسَاءٌ مِنْ نِسَاءٍ عَسَىٰ أَنْ يَكُنَّ خَيْرًا مِنْهُنَّ ۖ وَلَا تَلْمِزُوا أَنْفُسَكُمْ وَلَا تَنَابَزُوا بِالْأَلْقَابِ ۖ بِئْسَ الِاسْمُ الْفُسُوقُ بَعْدَ الْإِيمَانِ ۚ وَمَنْ لَمْ يَتُبْ فَأُولَٰئِكَ هُمُ الظَّالِمُونَ
O you who believe! let not (one) people laugh at (another) people perchance they may be better than they, nor let women (laugh) at (other) women, perchance they may be better than they; and do not find fault with your own people nor call one another by nicknames; evil is a bad name after faith, and whoever does not turn, these it is that are the unjust.
(Quran, Al-Hujuraat, 49:11)

Of course, not everyone involved in LGBT will respond to our call even if it is done in a nice and witty way, but what must come to mind is that there are gay people who are trying to improve, and these are the kind of people who we aim to save them and bring them to the right path, as-sirat ul-mustaqim.