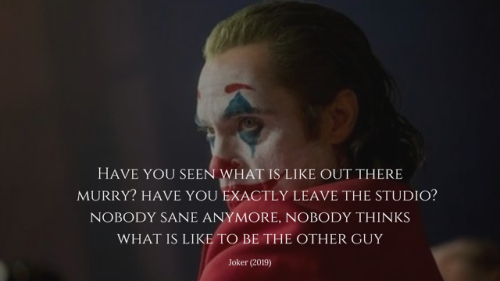 Published by asyhadu on December 7, 2019

Okay yes, the movie has been released like some time ago, but I just watched it. And i liked it. There’s more to the story than just about the character building of the ‘villain’ Joker (if you consider Joker to be the villain).

There’s something about the movie that reflected reality so well.

The whole story in Joker is about the poor being angry with the rich. It reflects the reality today. It shows how the rich are always arrogant, and are careless about the people.

It is very interesting that in the movie the famous Thomas Wayne, the rich mayor of Gotham city, said in the news that he doesn’t understand why the poor hate him and said that he “is just helping them.” But of course, it just mere lip service.

This is evident when Arthur, before he became the Joker, met Thomas Wayne in a theater toilet. That time Arthur thought that Thomas Wayne was his biological father, after being kept secret for a long time. As in the words of Arthur, “I don’t know why everyone is so rude, I don’t why you are, I don’t want anything from you, maybe a little bit of warmth, maybe a hug, come on, dad, i just want a little bit of ******** decency, what is it with you people?!!”

When finally after going through all the mental torture and after facing a series of rude things happening to him, Arthur became the killer Joker. What’s even ironic is that the masses supported the Joker. It shows how long the people have been bottling their anger.

Today, we have politicians and company CEOs who are no less arrogant and selfish than Thomas Wayne. It also reflects how the people today are turning out to be like the Joker- already ‘dead’ inside and their whole life “is just a comedy” as the words of Joker.

We can see today how big corporate companies, especially banks, use their financially dominant position to monopolize the masses by charging high interest rates and prices, and imposing exemption clauses in contracts to escape any risks in businesses. We can also see how politicians simply run on the mill just for the sake of money rather than serving public interest.

Do we need someone to become a murderer like Joker to stop all this?- Wait, it has already happened anyway.

“Surely, Allah knows what they hide and what they reveal. Indeed, He does not like the arrogant” (Quran, 16:23)
“IN THE NAME OF ALLAH THE MOST COMPASSIONATE THE MOST MERCIFUL” (Quran 1:1)