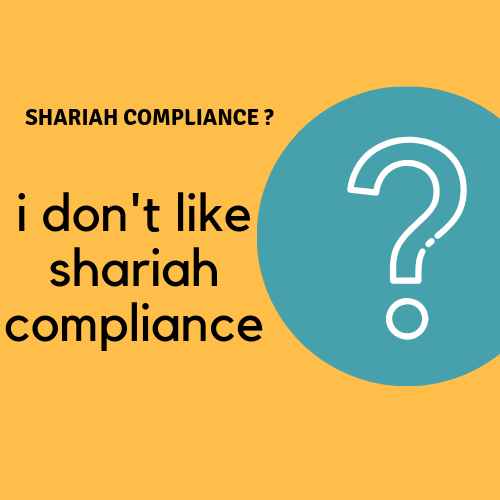 ‘Compliance‘ comes from the word ‘comply’- meaning, ‘to act in accordance to something’. ‘Serve‘ means ‘to perform duties for someone/something’. Very rarely Islam is only about ‘complying’. Allah also told us to also fight or ‘jihad’* in his path.

Take for example an airline company trying to be shariah-compliant by instructing their stewardesses to wear hijab and cover aurah. However, they will still be exploited to as a marketing tool to attract customers for their beauty. One of the criteria of stewardesses is they must be beautiful, so that customers will be attracted, especially men.The heart of the problem will still be prevalent- their attractiveness will cause men to still look at them. Why in the first place the stewardesses have to be women, and have to be beautiful?? THIS IS THE PROBLEM if we only focus on shariah compliant rather than shariah serving.

Another example is when celebrities who made ‘hijrah’ by starting to wear hijab. They think they are setting a good example to the community. But they forget that they are working in the entertainment industry- an industry which promotes pointless gossip, silly drama, useless sensationalism – which all lead to people wasting their time and ultimately forgetting about God.

The examples given, hijabi stewardesses and celebrities, show that they are not doing anything substantive to address the problems that the Sharia is trying to address. They are just putting a bandage over a wound that is bleeding a patient to death. What is worse is that people promote this shariah-compliant attitude, making the masses blind to the real problem.

Instead, an attempt to serve in the path of Allah requires one to be Islam completely and fully; a paradigm shift. The real ultimate solution has to be all-encompassing, and holistic. Just wearing hijab isn’t good enough, she has to fight that system which promotes those illnesses she was in the first place.

We should ask ourselves not only “Is it Shariah-compliant?” but also “Will it serve Shariah? “Bagai pahat dengan penukul” is probably a good Malay proverb to describe ‘Shariah compliance’. When Sharia tells them to do something, only they want to do. If Sharia doesn’t explicitly say , they also don’t want to do.