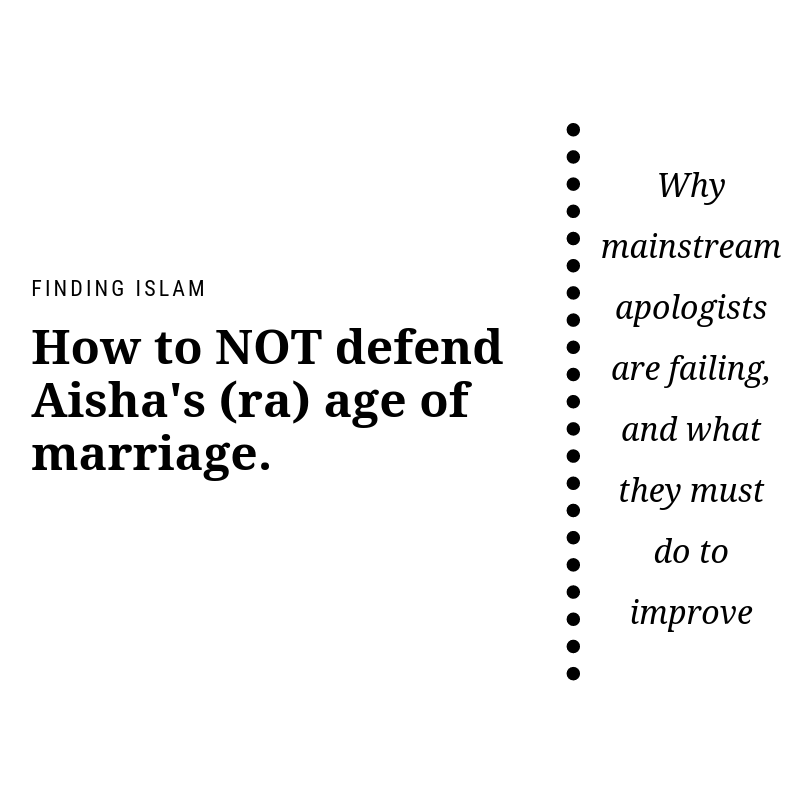 How to NOT defend Aisha’s (RA) age of marriage

بسم الله الرحمن الرحيم
With the ism of Allah, the Most Compassionate the Most Merciful

There have been many attempts to defend Aisha’s very young age of marriage. I’ve watched some videos and read some articles about it. Unfortunately I have to say there is a big embarrassment seeing some apologists trying to justify Aisha’s young age of marriage (Aisha was, according to them, married to the Prophet at the age of 6).

Aisha’s age of marriage have always been one of the most common weapon anti-Islamists use to attack and defame Islam. They would question why would the Prophet have done, according to them, a pedophilic act. Muslim scholars and wiseguys have to realise that this is not something we can go easy on! Serious efforts must be done to answer the doubts of the people!

Although there have been convincing arguments by Muslims themselves that Aisha’s age of marriage isn’t 6 but probably around her late teens [1][2][3][4], yet strict orthodox Muslims still insist that her age of marriage is 6 and the marriage consummated when she was 9.

I’m not taking sides here, my aim is to tell these traditional orthodox Muslims how they can improve on their argument. In this article my aim is to:

So what’s the BIG fallacy?

Those who defend Aisha’s young age of marriage usually argue that it is a normal practice to marry off young kids. So just because it was common and many people were doing it, child marriage can be justified? This is called the tu quoque fallacy. It is a fallacy which tries to justify a wrong act by saying other people are doing the same.

Child marriage can bring serious health effects, for example, girls under 15 are five times more likely to die in childbirth than women in their 20s. I wonder whether according to them, if child marriage is normalised today, would they say it is okay say child marriage is halal (actually it is halal to some scholars, so…)?

One thing the proponents of Aisha’s young age of marriage need to realise is that they should stop saying that other people are practicing child marriage to justify their stance (in fact, the examples they’ve given to prove this are kings of other nations practicing child marriage, not Arabs themselves). Are they trying to say that morality is based on what the society decides?

Another thing they should realise is that they should stop talking about the sexual lewdness in the society today when trying to justify Aisha’s age of marriage. This is called a ‘red herring’. Saajid Lipham (and many others) did this mistake in his video.

Questions that need to be addressed:

Here are the critical questions that demand critical answers which defenders of Aisha’s young age of marriage have been avoiding:

The advocates of Aisha’s young age of marriage need to up their game and stop resorting to fallacies. They better do something about this or else they are just doing disservice to Islam as a whole, and to the Prophet (saws) and Aisha (ra).