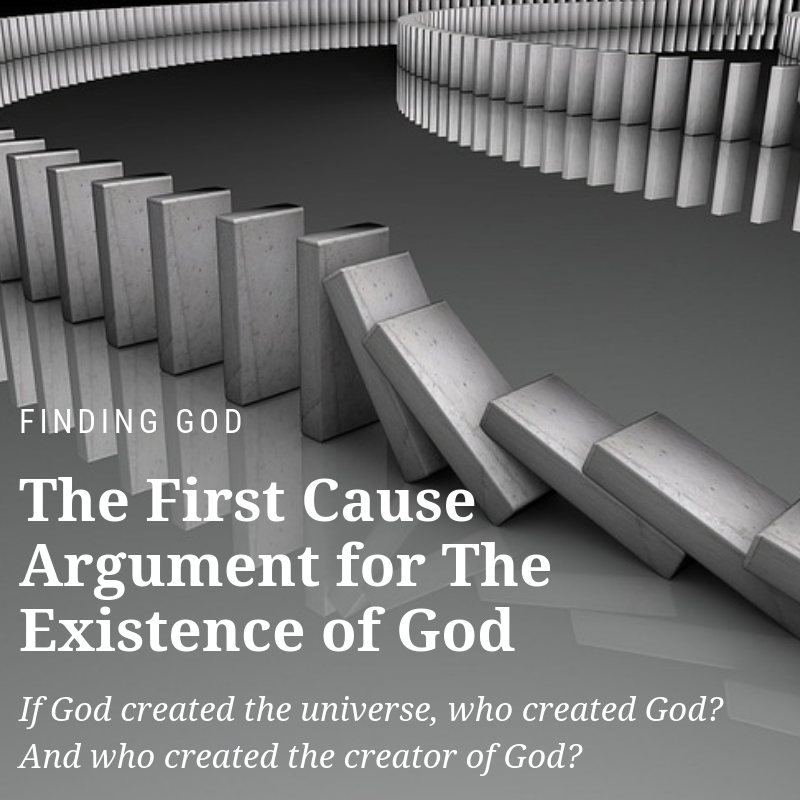 The First Cause Argument for the Existence of God

بسم الله الرحمن الرحيم
With the attribute of God, the Most Compasssionate, Most Merciful

Please read “Simple Argument for the Existence of God” also for better understanding.

Is there God? In this article I will be explaining from a logical point of view why there certainly must be God. The ‘first cause’ argument here is an extension to the contingency argument.

The contingency argument goes like this: You see everything in the universe is either a contingent existence or a necessary existence.

Necessary existence is something that must necessarily exist. It cannot not exist (no typing error here).

The necessity of the necessary existence

We can see that the universe operates on a cause-and-effect basis. No physical entity can run away from this universal law of cause-and-effect. That means everything in the universe is a contingent existence. But since for anything to happen requires a cause, that means, the cause before that also requires a cause, and that cause also must have a cause… and it all goes back to the uncaused first cause– which is the necessary existence.

But how can the uncaused first cause come into existence? If we are to ask this question again and again, we will never find the answer. Imagine you are a soldier holding a sniper rifle ready to pop the head of your target. But before that, you have to ask your commander. And that commander asks his commander, and that commander asks his commander. Will you ever get to shoot the target. No. Therefore, it must have a starting point where there is an executive commander who decides without needing permission from anyone. Similarly, since the universe exists and operates on a cause-and-effect basis, it has to has its uncaused first cause. It cannot stretch all the way back without the uncaused first cause, because that would mean infinity, and infinity is absurd in physics. Read “Simple Argument For The Existence of God” for further discussion.

So I hope here we can agree that there must be an uncaused first cause (also known as necessary existence). If not, go again and read the whole article to understand. If you ask me “what caused the first uncaused cause” you have displayed a gross foolish misunderstanding of my argument above.

Most apologists stop here as an argument for God. However, I’m going to further extend this argument.

The Uncaused First Cause must be All-Powerful

Secondly, the first uncaused cause cannot be bounded by time.

Thirdly, the first uncaused cause must only be ONE

Incomprehensible to the human mind

Next, since the uncaused cause is INFINITE and ETERNAL, that means it is incomprehensible to the human mind. The human mind cannot grasp what infinity really is. Infinity can exist in a made up institution like numbers, but it cannot exist in the physical universe. (Can you tell me which number reaches the point of infinity? There is always a ‘next number’ after every number) . Since the first uncaused first cause is INFINITE, that means it is incomprehensible, outside the of the physical universe, outside of our box of imagination. This makes the first uncaused cause TRANSCENDENT.

One more, since the uncaused first cause chose to bring the universe into existence, therefore it has WILL.

Of course, this doesn’t directly prove that the uncaused first cause is the God of Abraham. But they both are the same and we have good grounds to believe so: Both are ONE, ALL-POWERFUL, ETERNAL and INFINITE, TRANSCENDANT, and has WILL.

The God of Abraham

This (characteristics of the uncaused first cause) is fully in accord with the Islamic description of God:

Say, “He is Allah, [who is] One,
Allah, the Eternal Refuge.
He neither begets nor is born,
Nor is there to Him any equivalent.

“Say, “He is Allah, [who is] One,” the chapter begins with the introduction of Allah. Who is Allah? He is Ahad (One). He is only one. In other words, unique. Nothing is like Him. The only One. – ONE & TRANSCENDENT.

“Allah, the Eternal Refuge.” The term As-Samad (eternal refuge) cannot be explained in one English word or sentence. Al-Samad means ‘everything depends on Him’. Everything takes refuge with Him. Muhammad Asad renders the verse as: “God the Eternal, the Uncaused Cause of All Being.” This suits very well with the idea of the origin of the universe. There needs to be an uncaused first cause! – ABSOLUTE, ETERNAL, INFINITE, NECESSARILY EXISTS, EVERYTHING DEPENDS ON IT

“He neither begets nor is born,” Again, reiterating that God does not has a cause, and does not need a cause for His existence. Nor does He reproduce, for He cannot die.
ETERNAL, INFINITE,

This argument above not only showed that God’s must have existed, but also points towards the One All-Powerful God. A true appreciation of logic, philosophy and metaphysics would ease a person to appreciate God in full light.

Simple Argument for the existence of god– asyhadu.com