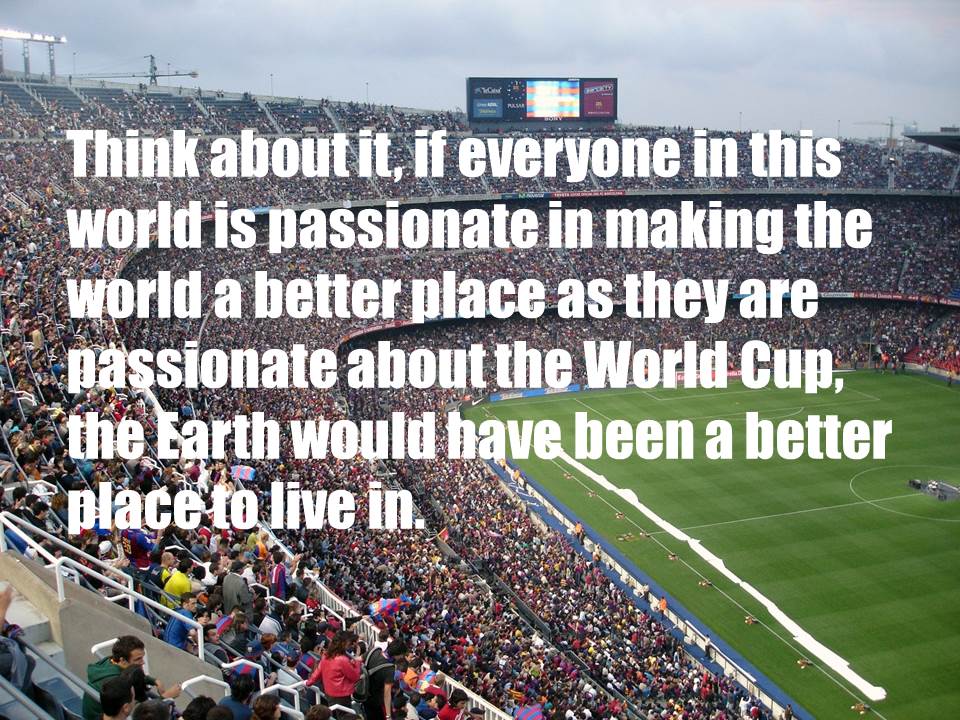 In the name of Allah, the Most Gracious and the Most Merciful, I start my writing.

Football fans are going to hate me for this. Sorry for that.

But I don’t intend to invoke any hatred at all. Forgive me for any hurt for writing this.

But, seriously think about it, what’s the point of spending tonnes of money for a sports event? I like football too, you know, but- look around you.  We have people suffering and dying in the embargo in Yemen,  people suffering in Palestine, refugees with malnutrition and without a place to live from Syria and Libya, famine in Africa, human trafficking in Russia, Belarus, Iran and many other parts of the world, countless of homeless people under the bridge, and we care more about spending our money on broadcasting a football event? There are people suffering and we have the heart to be oblivious (care less) about it by watching football.

What good does the World Cup does? I mean, how can the FIFA World Cup make the world a better place? Worst part is, we are paying them just to watch those games. Yes, games. We are directing our attention on games rather than real world problems I mentioned in the previous paragraph.

RM 30 Million is spent on the broadcasting of the FIFA World Cup in Malaysia alone. 11.8 Billion dollars are spent for the preparation of the World Cup by the host, Russia. The “non-profit organisation”, FIFA, raked in $4.5 billion in revenue last World Cup four years ago, and this year FIFA is expected to rake in about $6 billion in revenue from the 2018 World Cup, up 25 percent from the previous tournament.

It’s crazy. The fact that people would pay just to watch a bunch of people to chase a ball in the field rather than spending their money on humanitarian activities and programs- is just inhuman. We already have the Olympics for international sport events, English Premier League, SEA games, Commonwealth games, local football leagues, why the hell we need the FIFA World Cup anymore?

Don’t tell me that the World Cup unites people all over the world- it does not. They unite people in paying FIFA, yes, they do unite in that sense only. But in strengthening the brotherhood of humanity, it does not. If it does, why people are still not willing to help those in the Middle East, Africa, and other parts of the world? Why are big companies investing money for their own profit rather than investing money to help those in need?

People are easily distracted by petty stuff that does not mean much. A prominent writer and critic, George Orwell, wrote in his dystopian novel, 1984:

“Films, football, beer, and above all, gambling filled up the horizon of their minds. To keep them in control was not difficult….”

Karl Marx said that religion is the opiate of the masses —when really it’s football.” The masses don’t realise their priorities anymore.

We are enslaved by an international sports event to not just give our money to them, but to also direct our attention and priorities to them.  So much for the ‘greatest event every four years’, we forget that there are a vast amount of people out there who are being abused, oppressed, and are suffering, while we are telling our friends “Let’s watch the World Cup tonight.”