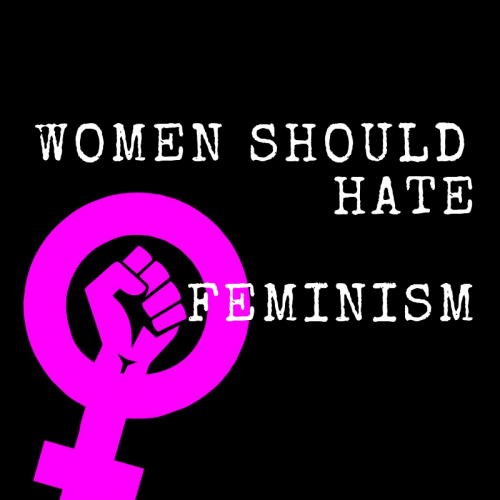 بسم الله الرحمن الرحيم
With the ‘ism’ of Allah, the Most Gracious, the Most Merciful

The purpose of feminism was originally to enforce the rights of women. But today feminism is used to wage war on men and to show off their rebellion and anarchy. They want to show that women ‘rule’, and that they have the choice for whatever they want. If this is what feminism is, feminists should be hated.

Feminism was originally about helping single mothers, being kind and nice to women, and fencing off sexual abusers. But today feminism is about ‘equality’, women doing hard labor work, women showing off their assets but yet claim not wanting to be abused or called at, women being rebellious towards their husbands. What is this?

Feminism does not represent women’s rights. It in fact, destroys the fight for women’s right. Because of ‘feminism’, people view it as something useless and ridiculous.

Feminists want to end rape, but what have they done? Instead of fighting the crime itself, they are actually waging war on man. How is war on men going to solve the issue of rape and sexual abuse?

By attacking men, these so-called feminists are doing nothing but actually diverting the attention from fighting the crime of rape into fighting men. Does the problem come from men, or from the rapers? If they want to end rape, then suggest for stringent laws, hate sexual abuse, not men. Campaign for justice, not ‘women empowerment’. Even if women are empowered, will the issue of rape be solved?

The idea of feminism today is rubbish. Simply rubbish. They are fighting for useless things like “dressing the way they want” yet they don’t want to get sexually harassed. They encourage women to show off their assets but don’t want men to be looking at them in a weird way. It’s like driving while drunk but expect to not get into an accident.

I’m not saying that men can abuse women just because the woman is wearing sexually appealing clothes. That’s utterly ridiculous. However, women in the first place should know that wearing sexually appealing clothes can attract unwanted attention, yet they still to choose to wear them, in the name of ‘women empowerment’. They don’t want trouble but they are creating that opportunity for trouble. How does that add up?

Allah said in the Quran:

Women and men can never be equal- and that’s justice (read: gender equity)

Same goes to men and women, both have their roles. Man are generally more suitable for hard labor work because they are created physically strong. Women are generally better in raising children because mother-child bond is stronger than father-child bond. This is due to the fact that mothers were the one who went through 9 months of carriage and through labor pain. Besides, milking the child creates the bond stronger between mother and child. It’s not suitable for women to do labor work while men only stay at home.

It doesn’t make sense those who fight for gender equality. God has simply made men and women different, and both have their own strengths and weaknesses.

A true feminist is a woman who fights for Islam.

In the end, the fight for feminism is nothing but pointless. It is more focused on women’s pride rather than on justice. So what is true feminism? To answer that, we return back to the one who created woman, i.e. God himself. God knows the best for us. He has prescribed for us the perfect system which protects the rights of women and humanity as a whole. Therefore, a true feminist fighter is a woman who fights for Islam, because Islam protects the rights of women.