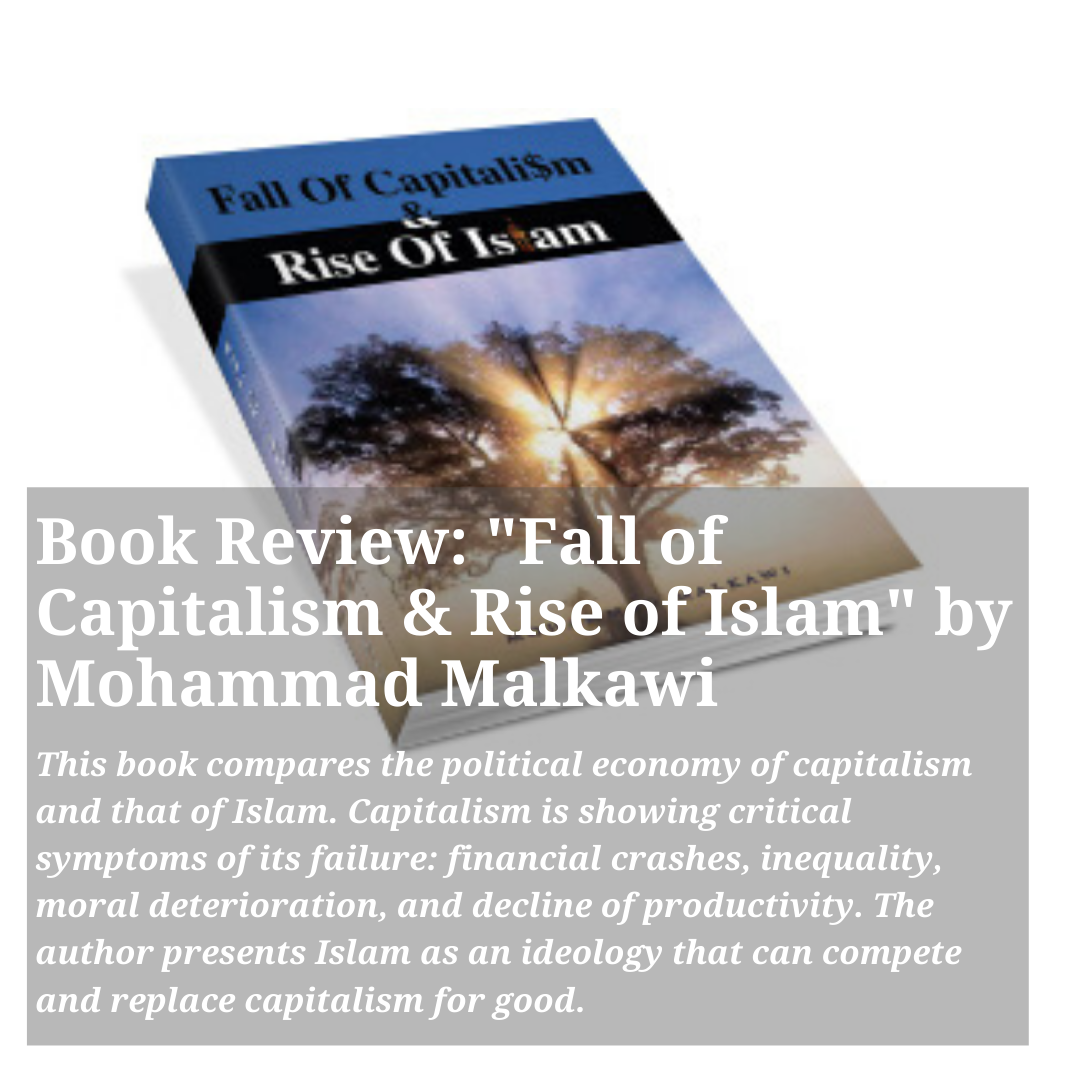 Book Review: “Fall of Capitalism and Rise of Islam” by Mohammad Malkawi

This book compares the political economy of capitalism and that of Islam. Capitalism is showing critical symptoms of its failure: financial crashes, inequality, moral deterioration, and decline of productivity. The author presents Islam as an ideology that can compete and replace capitalism for good.

The author, Mohammad Malkawi holds a Ph.D. in computer engineering from the University of Illinois at Urbana-Chapmaign. He studied in the Soviet Union (1974-1980), in Jordan (1980-1983) and the USA (1983-1986). He taught at several universities in the US and Jordan. He is an Associate Professor at Middle East University in Jordan and an adjunct professor at Argosy University-Chicago. He has lectured on political Islam at numerous conferences and workshops. Dr. Malkawi’s interest in ideological studies has been apparent since the time he was a student in the Soviet Union. Since then, he has written hundreds of articles on issues related to socialism, Islam, capitalism, and Islamic movements.

I love this book. It is very easy to read, very easy to understand. It is not like those books of Chomsky or (insert name) who uses bombastic words that are very hard to be understood by the public. This book is easy, despite a little research is necessary. It is also well-structured and straight-to-the-point.

The contents of the book are as follows

The first part deals with capitalism. The theory, flaws, downsides, assumptions, and implications of capitalism are discussed and the deficiencies of the system were proven. Mohamed Malkawi also has shown how capitalism failed practically. He provided numerous data, track records, and the history of capitalism. If you read it, you will find out astonishing data that show how disastrous capitalism has been (the inequality, hunger, poverty, etc) which perhaps, might be worse than the effects of socialism/communism.

Although socialism is not the main discussion of the book, his brief touches on socialism also satisfyingly shed some light on the differences between the three systems (capitalism, socialism, and Islam). For a normal reader like me (compared to an economist) he is making a case against two systems, rather than only one.

I also appreciate that the author compared the moral implications between the two systems (capitalism and Islam). As someone who loves moral philosophy, this matters a lot to me, in fact, it was the exact thing I hoped to find when reading this book. The moral implication is one of capitalism’s main downside. Capitalist moral is rooted in the ideology itself which makes it inescapable. Fortunately, Islam provides a great alternative to capitalism. Islamic ideology is rooted in the Oneness of God which gives Islam a sound basis for morality. The rise of Islam, is in fact, based on the change of morals from bad to good.

The author pointed out three cardinal weaknesses of capitalism:

In the second part of the book, Mohamed Malkawi discussed how Islam makes a sound political economy system. He argued how Islam covers the four weaknesses above, along with other benefits in Islam.

Extra credit should be given to Mohamed Malkawi for explaining the history of the first rise of Islam in the beginning of the second part which I believe is important to give full light to the explanation of the Islamic system and ideology. I also appreciate that he noted that the Islamic economy cannot exist on its own, rather, it has to come as a whole system. It has to come with its political system, its moral system, its financial system, and so on. It shows that Mohamed Malkawi fully understands the importance of the intellectual foundation Islam is founded upon and the branches that grow out of it. He does not only talk about the mechanical aspects of the economy like the distribution system or the use of gold. Rather his explanation is holistic. It takes into account its ideological foundation and its morality too.

Part 3: Is Islam a Threat or Benefit?

Finally, in the third part, the author Mohamed Malkawi talked about whether Islam is a threat or benefit to mankind. Here he polishes the argument why Islam is a better alternative to the current world order. What interests me is the history part. Mohamed Malkawi showed the history of the implementation of the ideology of Islam, and how Islam did well. He quoted what numerous Western historians say about Islam, which challenges the notion that terrorism is rooted in Islam. I was surprised to see how these historians described Islam and our Prophet in a very delightful tone. Their descriptions were full of awe to the beauty and soundness of Islam, as well as the character and influence of the Prophet.

Mohamed Malkawi ended the book in a very nice way. He said:

“…Today, more than any other time in history, the world at large is living in
a state of despair, a state of falling moral and ethics, a state of the rich ruling
over the poor, a state of collapsing empires, a state in which man-made
gods are no longer able to sustain sovereignty or keep the worshipers. This
is the time for the rise of the one-god system, the god who is full of mercy,
who has no biases towards the rich, or the white, or the black, or the west,
or the north, or any kind of bias. This is the time for the rise of a new
system which creates a balance of wealth distribution, and a balance of the
laws with one and only one standard….”

One who is academically minded won’t get disappointed by the book. Mohamed Malkawi had done an excellent job in supporting his arguments with extensive references from different sources. One who reads it will find that the intricacies of the book, undoubtedly, shows the enigmatic expertise of the writer as well as the exhaustive amount of effort put into it.

Would I recommend this book?

Needless to say, of course! It is very insightful and invoking. Well-argued, well-structured, and well-referenced too!

But more importantly, is because I believe this book can change the way the reader looks at things. People have to know about this. People have to know about the weakness and evils of capitalism. Some people think that the alternative is socialism, or more democratic capitalism, or democratic socialism, or whatever it is (the book discussed this too) but the reality is farther from what they say. The root of the problem is still there, and only the rise of Islam can propose a better and sounder alternative to the current world order.

It needs to change, and change won’t come until the system changes as a whole.

You can get the book here: https://fallofcapitalismandriseofislam.wordpress.com/