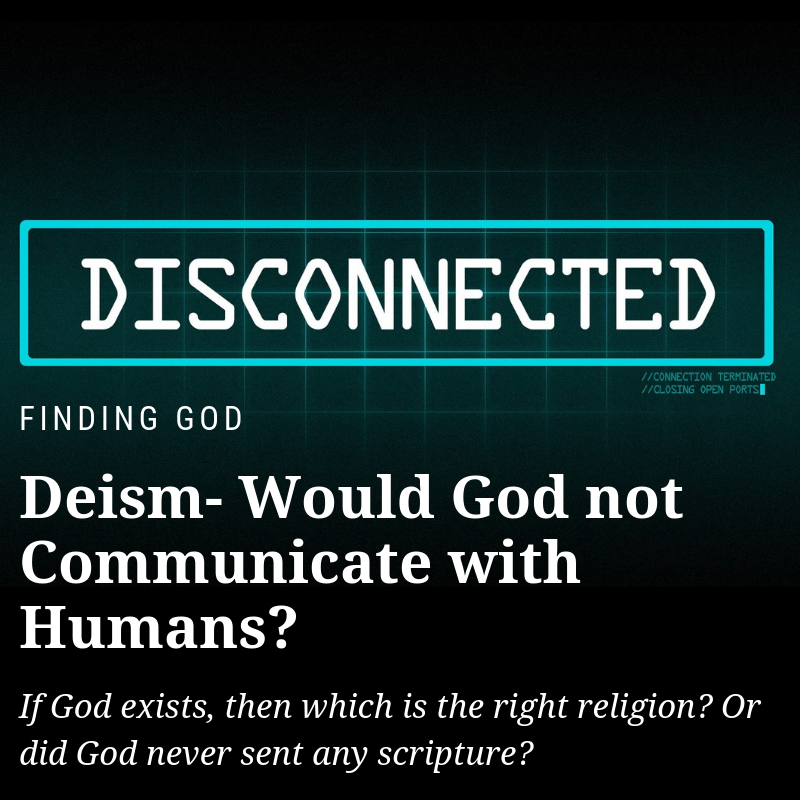 Deism- Would God Not Communicate with Humans?

بسم الله الرحمن الرحيم
With the name of God, Most Compassionate, Most Merciful.

If God exists, then which is the right religion? Or did God never sent any scripture?

Now, for those who are rooted in strong faith (with evidence) that there must indeed be a higher power that created the universe, the next question on mind is “Would God communicate with us?”

Indeed, there are many scriptures and prophets whose adherents claim it to be the words of God. So how can we know which is really the word of God? Or did God choose to not communicate with humans- as what deists believe?

In simpler terms- God created us and we have to decide for ourselves why and how to live.

It’s interesting to think that God would create humans, and left them by themselves. Besides, man is given innate disposition (fitra) to distinguish good and bad. Man don’t need religion, they have reason which can dictate them how to live.

However, this notion (deism) is hard for me to accept. If it is true that God left us without divine communication, then that means God left us in a state of confusion and bewilderment. It means we have to live our lives without knowing what is the purpose God created the universe.

Humans are programmed to search for meaning

We are HUMANS. Our souls are programmed to search for God. Research found out that our brains are programmed to find meaning in life. Human is a thinking animal- endowed with wisdom unlike any other creature in the universe. That wisdom finally leads us to God.

Does it logically follow that God created humans who are programmed to find God but God doesn’t want to talk to His creations?

Would the Most-Wise and Most-Intelligent simply let us humans wander on Earth, without knowing our purpose and meaning? Without guidance?

The Deist’s God is cruel

Alternatively, maybe the god of deism created a universe just to watch the “fish” in the “fishbowl,” which seems a lot more cruel than the God of theism, who has a purpose for evil. So, the god of deism is either stupid or cruel or both. Such a god seems unnecessary in the overall scheme of the universe.

Rich Deem, “Why Deism Fails as a Philosophical Paradigm of the Universe” at godandscience.org

Not only that the deist’s God left humans in confusion, but also with false religions, wars, killing, oppression, famine, poverty… all of which can be attributed to an evil god SINCE god CHOSE to not communicate with humans and let them astray from the right path without guidance.

Will there be afterlife? If there is why wouldn’t God tell us? If there isn’t who will punish the wrongdoers on Earth? How will justice be served?

Creating the universe for fun?

Does life has a meaning? If yes, then what is the meaning? Humans attributed so many ‘meanings’ to life, but whose ‘meaning is right? If life has no meaning, then God created humans just for fun?

Reason cannot dictate the right way to live. Indeed man is given innate disposition to differentiate between right and wrong (as also supported in Quran 91:8), but that doesn’t mean man will always get it correct about what is good and what is bad. The Germans used to support Hitler in the second world war, their reason said it is the right thing to do. But does this make them right?

Everything boils down to this: If God is very Knowing and Wise, why won’t He communicate with us? Doesn’t God love us? Why would He let His own creations to be confused? An All-Loving God would not let that happen.

So if God communicated with us which scripture is the right scripture from God?

Is it the Quran, the Bible, the Torah, the Vedas, the Tripitaka, the words of Lao Tze, the teachings of the Wiccan witches, which one? Why are there so many scripture claiming to be the word of God? How can we be sure which is right?

I’m not going to answer in this post (maybe in the future, if God wills). The purpose of this article is simply to make readers reflect, and if possible ease their search for truth.

However, from the first cause argument we know that God must be All-Powerful, Eternal, One and Only. So this refines our search to only the monotheistic religions- which are the God of Torah, Bible, and Quran.

And these three Books are said to be from the believed to be from the same God- the God of Abraham. So the search is now only left to see which book lived the best to its standards of the ONE UNIVERSAL GOD.

You see the whole deistic philosophical paradigm is fully based on assumptions. They know that God exists, but they cannot substantiate their claim as to why God wouldn’t communicate with humans. How do they know that God doesn’t want to communicate with humans? There’s not a single proof! Not only that, but what they believe is nonsensical too. Would the God who has created everything in the heavens and Earth with such incredible precision, intelligence and beauty, also created humans without higher purpose?

The Quran’s Argument Against Deism– asyhadu.com
Why Deism Fails as a Philosophical Paradigm of the universe– godandscience.org