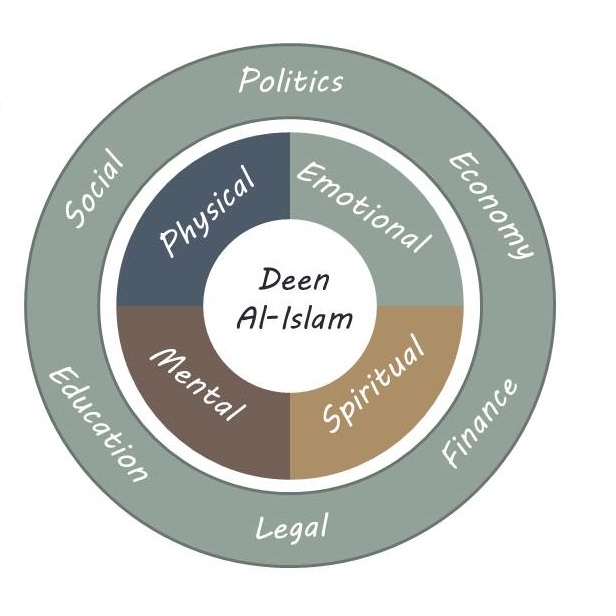 Islam Is A Way of Life, Not A Religion

We all have heard that Islam is a complete way of life, but do we really  understand Islam as a way of life (deen) ? Or are we just practicing Islam as a religion, like all other religions on the planet?

Unfortunately, many Muslims, including the most pious ones, practice Islam only as a religion, although they know that Islam is a complete way of life.

To them, they think Islam is about some kind of ritual-worship like praying and fasting, but they don’t see Islam as their ultimate purpose in life, the reason for their existence. When you ask them “What’s your goal in life?”. They’ll probably answer “to get rich”, “have a good family and job”, but they can’t relate their lives with ‘Ibaadah (serving Allah).

They also don’t see Islam in other areas of life.

For example, they pray five times a day but in state affairs they follow the Western law. They fast every Monday and Thursday but they practice riba and cheat in businesses. They marry using Islamic law but in criminal matters they use Western law.

Islam is a complete way of life encompassing all aspects from collective matters like politics, economy, judiciary, society, to personal matters like family, inheritance, marriage. Islam also deals with civil matters like contracts, debts, etc. How can you say Islam is your way of life when you are only practicing Islam in prayers, but ignore Islam in other parts of life?

It is wrong to say Islam as a religion, because the word religion is only restricted to the spiritual and ritualistic sense. Islam is not only confined to spiritual rites, its teachings are very broad. Islam unites spirituality with materialism, mundane with moral, world with hereafter. Islam has prescribed instructions on all areas of life. They all go hand in hand.

Throughout the Quran, Allah used the word ‘deen‘ (دين) to refer to Islam (except when referring to teachings of Ibrahim, Allah used ‘millah ملّة’ ) . ‘Deen’ does not bring the meaning of ‘religion’ in the common distorted sense. Actually, the closest English word/phrase to ‘deen’ would be ‘way of life‘ and ‘system‘ or ‘reward‘.

The basic meaning of ‘deen’ is ‘reward‘ (Quran 1:3). Deen is also used in the Quran to mean ‘debt‘ (2:282).
↓
Reward and debt is always on the basis of some laws. If anyone abides by the laws, he will be given good reward and in case of their violations, he will be punished.
↓
Laws are there to support a system and the system is known by the one who has the absolute authority and command.
↓
The value of a system exists till the time it is obeyed. [1]
↓
Way of life.  (42:13)

Besides, by understanding the Quran as a whole, anyone can get the idea that Islam is not only a religion but Islam is a way of life because in the Quran there are instructions on how to govern the country, how to manage finance, how to punish criminals, how to resolve disputes,  how to come to a judgement, how to think, how to learn, how to teach, how to build a family, moral codes – ALL of these, it’s impossible to say Islam is a mere religion, but in reality Islam is a complete code of life.

When we understand Islam as a religion, that is when deeds turn into mere rituals.

Applying Islam as a way of life

When a person begins to see Islam as a way of life, rather than a mere religion, he or she will be able to differentiate between Solat (social system) and Prayers (ritual), between zikr (keeping Allah in mind) and hymns (chantings with no direction like Christians), between practices (actions with purpose) and rituals (actions with no purpose), between a strong worldview (deen) to stand by and blind faith (religion).

When the term ‘deen’ is used for Islam, it obviously means Islam as a system of life where Allah SWT is worshipped and obeyed not just in the the narrow religious sense, but in a manner that includes all aspects of life.

The diagrams below illustrate the difference between deen and religion.

The charts below shows the position of deen in life, in contrast to religion.

As you can see, being ‘religious’ means being secular, because religion is separated from state and public affairs, but that is not what Islam is.

Is Islam the deen today?

Since deen Islam encompasses not only individual matters but also matters as a social being, deen Islam is not upheld/established (qiyyam) today. Deen al-haqq or deen al-Islam was established/perfected at the time of prophet Muhammad pbuh and collapsed several centuries after that (whether it collapsed during the Umayyad, Abbasid or Ottoman caliphate, that is just a matter of speculation).

Deen al-haqq is long gone. No country or nation in the world today practices the commandments of Islam in their political, economy, judiciary and education system today.

That’s why Allah ordered us to work towards the Qiyam al-deen (the establisment of deen) by implementing Islam in all aspects of life, and when that deen is established it will be known as Yaum al-deen (the day of the deen/day of judgment) and also known as Yaum al-qiyaamah ( the day of establishement (of deen) ) and on this day deen (way of life) will only belong to Allah– and no one can escape this deen.

Although deen al-Islam is not established today, we should practice what we can AND strive (jihad) towards the establishment of deen (qiyam al-deen).

Conclusion- what can we do today?

Islam is a complete code of life, Islam is the solution of all problems. Its teachings are holistic and all-encompassing. And we should embrace Islam fully, not just practicing some parts and abandoning the other.

O you who believe! Enter into submission (Islam) as a whole and do not follow the footsteps of Shaitan; surely he is your open enemy.
(Surah al-Baqarah, 2:208)

The Sunnah of Allah is that history repeats itself (48:23)- we are turning back to the age of darkness, also known as the age of Jahiliyyah- the time when before Islam was re-lived by Muhammad. And it is our responsibility as servants of Allah to re-establish the deen (Qiyam al-deen). How to do it? Just follow how the Prophet pbuh did it! And that requires us to read before actually doing it.

As what is commanded in the first revelation sent down to Muhammad pbuh, – READ! Then Allah will teach you. (96:1-5).