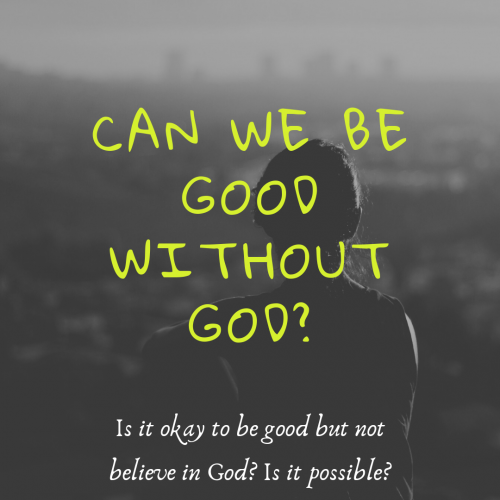 Can we be good without God?

Without God there is no yardstick to measure the morality of an action.

In other words, to judge an action as ‘good’ or ‘bad’ is only according to preference- assumptions.

According to atheistic worldview there is no God, and so therefore morality is not objective, but subjective. People create their own definition of ‘good’ and ‘bad’. Thus if naturalism is true, William Lane Craig states “it becomes impossible to condemn war, oppression, or crime as evil. Nor can one praise brotherhood, equality, or love as good. It does not matter what values you choose—for there is no right and wrong; good and evil do not exist. That means that an atrocity like the Holocaust was really morally indifferent. You may think that it was wrong, but your opinion has no more validity than that of the Nazi war criminal who thought it was good.” [1]

No real solution to achieve peace and justice

Look at the West, how they tried to achieve peace by divorcing state affairs from religion. Things got worse by then.

Islam, on the other hand, does not only prescribe laws to be implemented, but also the clear way to establish the laws of God. Such a question would require one to dive into deep study of the Sira- the history of Rasulullah saw. Basically how it differs with the secular West is that there are always guidelines that must be observed- like inclination to peace (Quran, 8:61), men, women and children’s right, consultation/ check & balances (Quran 42:38, 4:59), and so on. These rights that the West is fighting for now had been upheld way back in the 7th century!

Imagine a town leader setting an example for the town people by doing good, giving charity, helping the needy and so. But in the end he tells people that it is okay to not follow the rules and regulations set by the town council.

Similarly, an atheist doing good to make the world a better place ends up saying that it is okay to not follow the rules set up by the creator of this world. As a result, his actions are self-destructive (wronging themselves/ zalim)

True justice is when and only when there is belief in Allah and doing good deeds. “You are the best nation produced [as an example] for mankind. You enjoin what is right and forbid what is wrong and believe in Allah” (Quran 3:110). This verse indicates that the best nation is not only one that does good but also believes in Allah (by not associating partners to Him).

Why should one be moral, even if we know what morality is? What good does it give to a man when he sacrifices for another person, isn’t that just a waste? All of the good one does, will finally end in the grave and our names will be just gone like that. What does our good deeds contribute to? Making the world a better place? But everyone will die anyway and objectively speaking, it doesn’t even matter whether the world is good or bad, because people would die anyway.

Furthermore, atheist ethicist Kai Nielsen writes “We have not been able to show that reason requires the moral point of view, or that all really rational persons should not be individual egoists or classical amoralists. Reason doesn’t decide here. The picture I have painted for you is not a pleasant one. Reflection on it depresses me . . . . Pure practical reason, even with a good knowledge of the facts, will not take you to morality. ” [1]

And there’s also no reason for bad people to be good. On this world, not even one legal system is flawed, and bad people can easily get away with their evil crimes. Like a mafia boss who commits crime can easily bribe policemen to not get caught. Even if he doesn’t bribe the policemen, it would still be hard to punish the mafia boss because he has many other mafia members protecting him. In the end, he will die a peaceful death. Is this the idea of justice to self-proclaimed naturalists?

Without the belief in Allah and the Last Day, the idea of justice to atheists is just a fantasy, where they expect people to ‘evolve’ into a just society.

True Justice= Laws + Authority + Truth (Haqq). Without authority there wouldn’t be a real justice system. And on this worldly life, no human has authority on the mafia boss, but God has. Even the smallest actions will be accounted for in the Last Day;

Religion (the right one) is the only sound foundation for morality and justice (or what is ‘good’). Without God, there’s no real way to determine what is wrong or right and would ultimately lead to chaos and sickness of the heart. Only with the existence of Last Day, true justice is upheld. Being good, for Allah, and with the believe in Him, constitutes the meaning of tauhid.