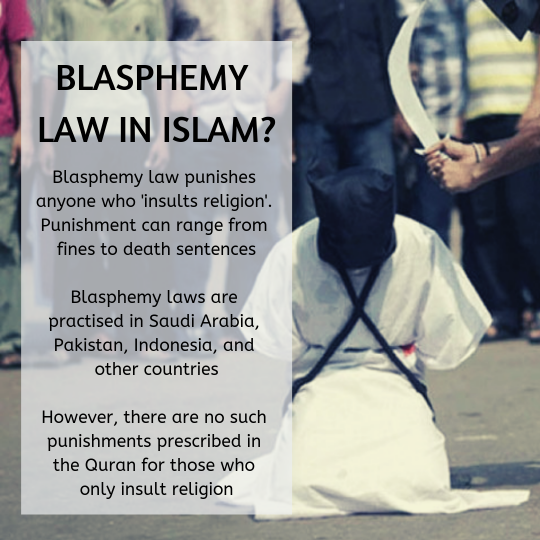 Published by asyhadu on February 2, 2019

Should someone be killed just be cause he/she said something offensive? I came to a shock few days ago when reading about Asia Bibi’s case in the Washington Post. She is a Chrisitian accused of blasphemy, and had been waiting on the line for her death sentence from 2009, only until recently the Pakistani court decided to acquit her of charges (meaning, she won’t be punished). Religious hardliners want her dead just because she insulted the Prophet. Religious freaks protested the courts decision for her acquittal. It stirred up mobs and riots. There was even a petition signed just to get the court review the case.

Blasphemy law ordains that those who insulted religion can be executed or imprisoned. It is happening in Pakistan, Saudi Arabia, and Indonesia. Asia Bibi’s case certainly isn’t the first, there have been many before her. Jakarta’s governor Ahok was sentenced to two years imprisonment just because he, as a Christian, rebuked the clerics that claimed Muslims should only vote for Muslim political leaders.

Two things that shocked me: one, there exists such laws where people should be killed just because they said something. Two, there exists blood-mongering Muslims who would stir up a mob just to get someone killed in the hands of law.

Is it in the Quran?

First of all, there’s no such thing as blasphemy law in Quran. It’s strange how there are still Muslim countries that are still carrying out this barbaric law, and think they will go to heaven and have 72 virgins waiting for them for pushing the execution of a disbeliever.

Blasphemy law, in fact, is a product of Christianity where the Church used it to silence anyone who protested or insulted Christianity or the Church [1]. Galileo Galilei is a famous example where he was burnt a live just because he found out that the Earth is a sphere, and not flat as the Church believed. The law was imported into Muslim countries by British colonials during the imperial era [2].

Even the Quran never told us to punish those who insulted religion, not to mention killing them. Quran only permitted killing and war on three occasions: a) for self-defense, or if someone imposed a political and security threat [3] b) to liberate the oppressed, [4] c) a murderer [5]. In this manner, those who insulted religion and impose danger on a person or the state, those are the only ones who are permitted to be killed.

How to deal with blasphemous people

On the contrary, Quran teaches us to forgive and turn away. If you can, then debate them in a nice manner [6]. Contrary to popular belief, Islam is a deen that promotes the use of intellect and logic. It’s about inviting people, not forcing them to Islam.

What to do when someone insulted religion? It’s very simple- TURN AWAY. That’s all you have to do. You don’t have to go mad ravaging for blood.

Hold to forgiveness; command what is right; But turn away from the ignorant.
(Al-Quran, Al-A’raaf, 7:199)

Does the Quran tell us to kill the ignorants? Tell me of any verse that tells us to kill. I only find the contrary.

And the servants of the Beneficent Allah are they who walk on the earth in humbleness, and when the ignorant address them, they say: Peace!
(Al-Quran, Al-Furqaan, 25:63)

This is what the Quran teaches! Even if you’re so angry at them, after turning away, you can use salam as sarcasm!

You’ll never know one day, that those who have been the most hostile against Islam might turn out to be the strongest supporter of Islam.

If the non-Muslims aren’t happy about Islam then simply challenge them to a debate. If they continue to be ignorant, just turn away.

Blasphemy Law goes against the teachings of the Prophet

Those who impose blasphemy laws, go against the teachings of the Prophet. Muhammad (pbuh) never attacked because of personal reasons. If Muhammad really was a violent person, he would have slained all the Meccan polytheists during the Liberation of Mecca. He should never have accepted Umar’s syahada because Umar used to insult the prophet. Yes, the Messenger of Allah did kill some people, but, as I said again and again, it wasn’t because of personal reasons, instead that person posed a threat to the security of his people. Watch: Blasphemy Law in Islam by Dr. Yasir Qadhi.

It is really disgusting to see that some Muslims would bark like dogs or threaten to kill when someone gives a bad opinion about Islam. They have not only misrepresented Islam, they don’t even have humanity in themselves. If they think killing is the solution to stop blasphemy and apostasy, they really have low standards.

One of the functions of the Quran is that it acts as a diffrenciator (furqan) between right (haq) and wrong (bathil) [7]. This itself is a great blessing, if you think about it! We have a book to guide us in our lives. No other book can do this. Not even the Bible, because no one actually knows who wrote the Bible.