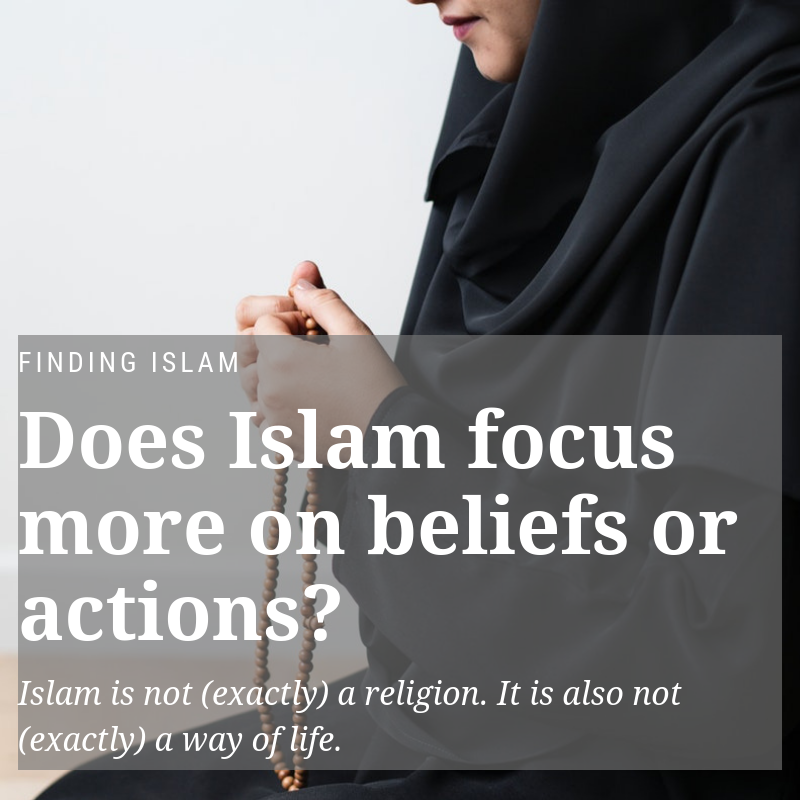 Does Islam focus more on beliefs or actions?

Photo by rawpixel.com from Pexels

بسم الله الرحمن الرحيم
With the ‘ism’ of Allah, Most Compassionate Most Merciful

Islam is not (exactly) a religion. It is also not (exactly) a way of life. When we say religion, it mostly deals with what to believe and rituals in it. When we say way of life it mostly deals on our conduct and actions. But Islam doesn’t only focus on one of them. The truth of the matter is that Islam puts equal significant importance on both belief and action. One cannot work without the other. Action without belief is lame and belief without action is blind (so much for parody of Einstein’s quote ‘Science without religion is lame, religion without science is blind’)

Quran’s stress on belief and action

Belief is the main driving force, action is the manifest of that belief.

Many times Allah stressed on belief, to not take other besides God as gods, that it is hard to think that belief is just something trivial or mundane in Islam. It is tawheed which forms the core of Islamic teachings. It is instead what motivates a slave of God to do whatever he needs to do. Belief cannot be separated from Islam and its power cannot be underestimated. That’s why God told us to constantly get closer to Him,

The Quran also puts equal importance in actions. Many times in the Quran Allah said “Those who believe and do righteous deeds…” signifying the importance of actions entailing belief.

Actions are imporatant because they are manifestation of belief. How we measure belief? How do we know if our belief is strong? It is when we see our actions. The actions are like fruits growing from a tree which the belief are the roots which strongly holds on to the ground. This is the parable Allah azza wa jall given in the noble Quran:

Have you not considered how Allah presents an example, [making] a good word (kalimah) like a good tree, whose root is firmly fixed and its branches [high] in the sky? It produces its fruit all the time, by permission of its Lord. And Allah presents examples for the people that perhaps they will be reminded. And the example of a bad word (kalimah) is like a bad tree, uprooted from the surface of the earth, not having any stability. Allah keeps firm those who believe, with the firm word, in worldly life and in the Hereafter. And Allah sends astray the wrongdoers. And Allah does what He wills.
(Quran, Ibrahim, 14:24-27)

The word ‘word’ (kalimah/qawl) here means the principles of a person that he holds on to. Or in other words the beliefs of a person. This is also the opinion of most of the commentators of the Quran. The word kalimat is also used in Quran 2:124 to mean ‘commands’. From here it can be implied that the meaning of the word kalimat is wide.

If our beliefs are strong then automatically our actions would also be fruitful. In contrast, if we are only talking a lot but no action, it shows that something is wrong with how we think. God told us to not set up partners with Him, to do good to parents, to establish the prayers, to give zakah, to read the Quran- all of which that will set the right mindset for us, and thus make our lifestyles improve. This is the straight path. Those who deviate from it will have bad results like the bad tree.

Actions are so important that it actually shows who we truly are.

Imagine the example of a man to a woman he loves. He would not only tell his love but show it. Similar is our belief in Allah. We don’t just say it. We do it. Examples of commands for actions in the Quran:

Once we have understood the importance of belief and action in the Quran, we should come to the conclusion that Muslims aren’t simply living for nothing on this planet. They have a mission statement: to bring peace and order to the world through the Deen ordained by God.

What is Islam for? PEACE. What is muslims for? Establish PEACE.

O you who have believed, be persistently standing firm for Allah, witnesses in justice, and do not let the hatred of a people prevent you from being just. Be just; that is nearer to righteousness. And fear Allah ; indeed, Allah is Acquainted with what you do.

Allah created man so that man will be the ones endowed with the responsibility to govern Earth through the Deen ordained by Allah:

… وَإِذْ قَالَ رَبُّكَ لِلْمَلَائِكَةِ إِنِّي جَاعِلٌ فِي الْأَرْضِ خَلِيفَةً
And when your Lord said to the angels, “Indeed, I will make upon the earth a successive authority (khalifah).”…

Khalifah means ‘successor’; the one who will be entrusted by Allah to govern the Earth. And Allah had said that Islam; the only system that is truth and real, will prevail in the end:

The ones who will make the system (deen) to prevail over all systems are those who believe, emigrate, and fight in the path of Allah.

إِنَّ الَّذِينَ آمَنُوا وَالَّذِينَ هَاجَرُوا وَجَاهَدُوا فِي سَبِيلِ اللَّهِ أُولَٰئِكَ يَرْجُونَ رَحْمَتَ اللَّهِ ۚ وَاللَّهُ غَفُورٌ رَحِيمٌ
Indeed, those who have believed and those who have emigrated and fought in the cause of Allah – those expect the mercy of Allah . And Allah is Forgiving and Merciful.
(Quran, Al-Baqarah, 2:218)

It is clear from the discussion above that Islam is not just about what to believe. And is also not just about conduct. But Islam incorporates both belief and conduct. Both play equally important parts in realising the mission statement of the believers to establish peace and order, which is by establishing the Deen ordained by the One True God.